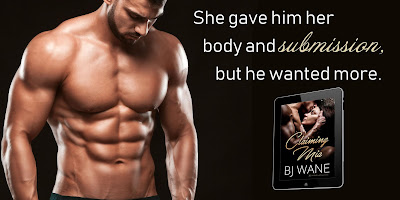 Before diving into a new series, I decided to finally finish this book that I started over a year ago!  CLAIMING MIA is a stand alone read featuring a dominate, determined sheriff and the newly divorced landscaper he refuses to give up on.  Release date-November 16.  In January, watch for the release of SUBMITTING TO THE RANCHER, a $.99 short story which will introduce characters for a new series.  In the meantime, I hope you enjoy reading about Mia's first experience under Nolan's hard hand. 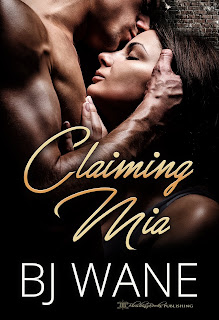 
Newly divorced Mia Reynolds didn’t like Chief Nolan MacGregor.  His arrogance got under her skin, but it was her body’s instant reaction every time he leveled that cobalt gaze upon her or hinted at giving her what he kept insisting she wanted that really got to her.  After her husband’s betrayal, she’d sworn off getting involved with anyone, and certainly wasn’t going to trust her fragile heart with the town’s reformed bad boy.


Nolan wanted Mia and refused to let her prickly stubbornness stand in his way.  Once he entices her into an affair and shows her the benefits of submitting to him, her off the chart responses proved he’d been right all along-she was the one for him.  When his investigation into an illegal drug ring that appeared to be funneling tainted drugs through his small town implicates Mia’s business, he never stops believing in her innocence.  When the Feds go around him, Mia refuses to believe he hadn’t been with her just to keep an eye on her and her nursery for proof the drugs were coming in on the trucks carrying her landscaping orders.


Mia’s reluctance to give Nolan her complete trust lands her in trouble with a drug trafficker and it wasn’t until she’d been kidnapped that she realized how much her insecurities and refusal to let go of the past might have cost her.
EXCERPT:

“You want to spank me instead of giving me a ticket?”  Mia didn’t know if her stunned disbelief stemmed from outrage at his audacity or the instant pickup of her heart rate which caused her blood to heat in a volcanic rush through her veins at the thought of his large hand connecting with her butt.
“In the worst way,” he admitted with candor, not bothering to hide the truth.  Then again, when had he ever held back from letting her know where his interests laid, she bemoaned.
They both heard Mia’s convulsive swallow as she contemplated her choices.  It came down to she couldn’t afford an increase in her premiums.  A shiver rippled down her spine as he pressed closer and his warm breath tickled her neck when he nipped the tender skin.  Okay, maybe the strain on her finances wasn’t the only reason she was giving his suggestion serious consideration.  If she could sate her curiosity about the way her body was always so quick to react to his sexual innuendos about putting her over his knee, remarks she never imagined would titillate her before the divorce, maybe she could put him out of her mind once and for all.
Taking a deep, nerve-bracing breath, she muttered in a whisper, “Fine,” as if there might be someone around who could hear her.  “I’ll meet you…what?” she gasped, incredulous as he spun her to face the truck and hiked up her skirt.  “Here?”
“No time like the present.  Don’t worry, Mia, my body is blocking yours, but even if I wasn’t, no one driving by can see back in this far.”  With a hard yank, he drew another outraged gasp from her when he tore off her panties.
Warm summer air wafted over her exposed buttocks for the first time in her life, shocking her when the sudden outdoor exposure elicited a thrill of excitement.  Before she could grasp the significance of that, he palmed her right cheek and squeezed, the instant pleasure from his touch taking her breath away.
“Just as I thought,” Nolan rasped, bending his head to nip her earlobe.  “Soft and malleable.  And so very…spankable.”  He drew back and slapped the same cheek, a light smack that tingled more than hurt.
Mia shut her eyes against the warm dampness filling her long-neglected pussy, mortified by her response to what should have been an abasing experience.  The next swat covered her other cheek and was just as potent as the first.  Her tense muscles relaxed, and she thought this wasn’t so bad when he delivered a harder smack that jiggled her flesh.  A small cry slid past her compressed lips, but he didn’t give her time to balk or complain as he set about peppering her butt with a volley of spanks, alternating between light and hard enough to sting while moving back and forth between her buttocks.  A slow warmth enveloped her entire backside, along with small prickles of pain as the slaps grew sharper.  Unable to help herself, she lowered her head to rest on her hands braced on the truck and tried to ward off the escalating pulses spreading down to her sheath.  A part of her couldn’t believe she was letting him do this and an even more insane part couldn’t fathom the escalating arousal the embarrassment and discomfort added to.
Nolan stopped and caressed her buttocks, the now soothing strokes calming her riotous senses.  “I knew you had a submissive streak worth exploring,” he said in a rough tone.
“I…no, I don’t,” Mia denied with an emphatic head shake.  “I’m only letting…ow!”  She shook from the blistering swat that seared her backside.
“We can get on with your education a lot quicker if you quit denying what you want, and need,” he admonished, his cold voice sending goosebumps racing over her arms.
She refused to go there with him right now, not with her bare butt on display and her pussy quivering from that painful smack.  “Are we done?” she asked, already knowing the answer.
“Not hardly.” 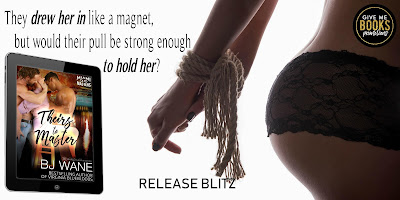 Paige Wilcox has been lusting after the Carlson brothers since the first time she saw the two men enter the cops’ bar where she works.  Problem is, neither man shows her the slightest interest-not until her sister is attacked at a club and they discover Paige posing as a submissive to draw out the assailant.

Troy and Trevor Carlson always found the feisty redhead attractive but steered clear of personal involvement since she showed no signs of being sexually submissive.  Fear for Paige’s safety and a determination to keep her out of their investigation into a serial attacker prods Troy and Trevor to insist she complete the terms of an auction contract after they win the bid on her.  Neither Paige nor the Carlson brothers are prepared for the streak of submissiveness she exhibits under their dual control.

Paige doesn’t fight her growing need for the two men and the alternative sex they introduce her to, but when they give no hints the feeling is mutual, she despairs of anything coming of the short-term relationship.  It takes the reappearance of the man they were after and another threat to Paige to get all three on board with giving a committed, three-way relationship a try.

Publisher’s Note:  This steamy contemporary ménage romance contains elements of power exchange.  While it is book six of the Miami Masters series, it can be read and enjoyed as a standalone. 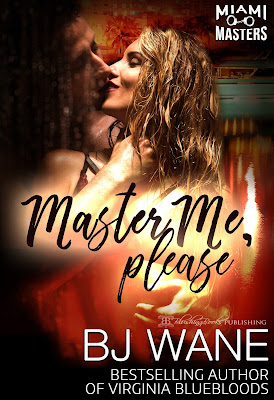 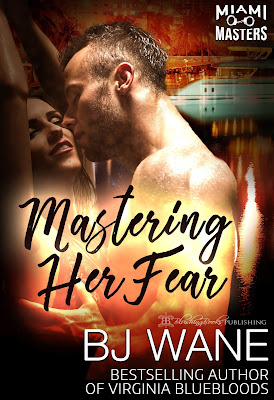 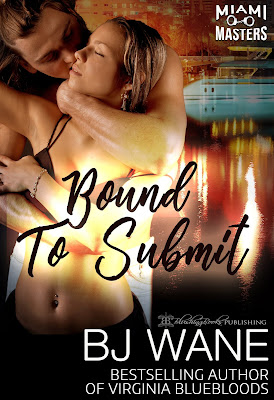 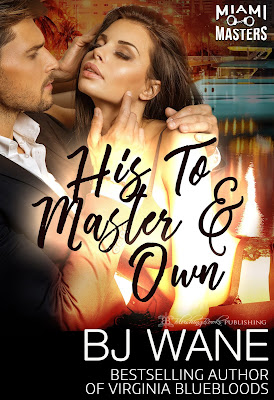 With the release of the final book in Miami Masters, THEIRS TO MASTER, I'm happy to announce you can read books 1-5 free in Kindle Unlimited!  If you haven't dipped your toes into this best-selling series yet, now is the perfect time to check it out.

AMAZON
Here is what readers are saying about the series: 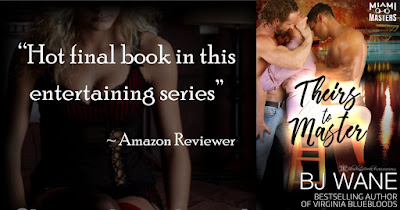 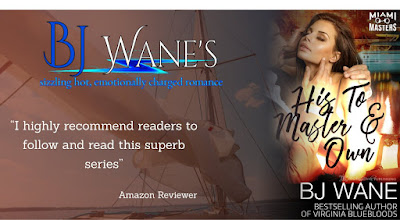 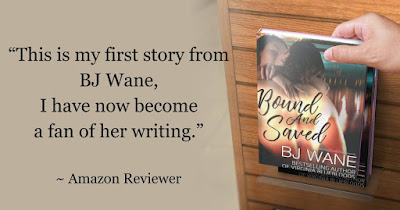 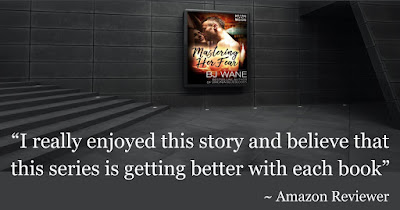 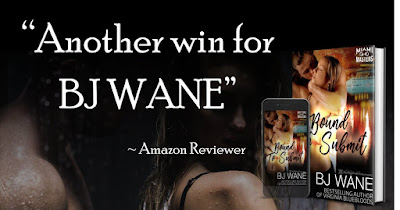 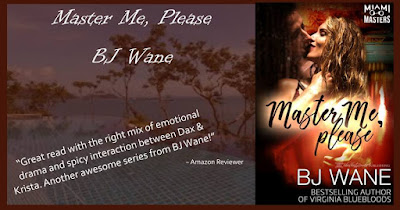