Thank you to all of you who have made the first two books in the Cowboy Doms series such a huge success!  I've received many inquiries about Connor's book and I'm happy to announce book 3, SUBMITTING TO THE COWBOY has been accepted and is slated to come out on April 12.  Here's a short tidbit to whet your appetite.

Be sure to pop over to my guest post page and check out the new releases by POPPY FLYNN, FELICITY BRANDON, ROSE ST. ANDREWS, ANITA PHILMAR & KRYSSIE FORTUNE. 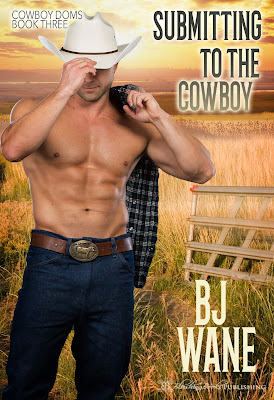 Blurb for SUBMITTING TO THE COWBOY


Tamara Barton had lusted after Connor Dunbar ever since she was old enough to know what those stirrings meant whenever he was near.  Connor’s refusal to see her as anything but the young girl he’d befriended and protected for years soon drives them apart, but not before she got an up-close, personal glimpse of him exerting the dominant control she’d heard rumors about.


Connor regretted the harsh words he’d spoken to Tamara when he caught her spying on him as much as his lustful response to the look of need reflected on her face.  He’d been looking after the neighboring girl since the moment he saw her falling off her first horse at the age of ten and didn’t plan on stopping now she was a grown woman who thought she wanted their relationship to go in a different direction.  He knew his sexual proclivities were not for the young, sweet kid he was so fond of, and wouldn’t jeopardize their special bond by giving in to her desires. 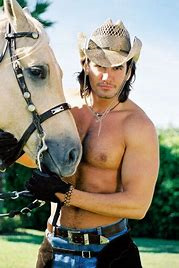 Connor followed his friend and now business partner into the parking lot of The Barn with little enthusiasm for socializing.  Working out a deal with Greg on the purchase of several horses for trail rides at his and Devin’s ski resort added to the perk of having Tam back in his life, even if he was unsure about how to define their relationship now.  That one uncertainty had a lot to do with his lack of interest in coming out to the club tonight.  He’d been itching to see her again, just to spend time with her and catch up on everything she’d been doing the past few years but didn’t want to push his luck since their relationship remained tenuous.  She’d always had a way of keeping him tied up in knots, but in the past, he figured those knots were due to the scrapes he’d been around to help her out of.  Now, his only explanation for what was causing them was the uncertainty of where he stood with her.


Greg beat him to the front door and pulled it open, raising a brow in inquiry as he said, “That frown is going to keep the subs at bay.”


“No it won’t.  They like me no matter what my mood is,” he replied with a wry grin as he entered before Greg.  Faint strains of edgy music seeped through the closed doors to the playroom, along with the hum of low voices.  His pulse kicked up a notch as the two of them stepped into the cavernous space and he could now catch the high-pitched cries coming from happily tormented subs.


“Christ, I love this place,” Greg murmured on a deep inhale that lifted his wide shoulders.  “I think I’ll track down my partner and see who’s willing to turn themselves over to the two of us.”


Connor’s grin widened.  Greg and his longtime friend, Devin were new to The Barn but already enjoyed their reputation of preferring ménages.  “Go on,” he encouraged with a nod.  “I want to start with a drink.”


With a slap on Connor’s back, Greg sauntered off and Connor headed toward the bar.  He spotted Caden bar tending and decided to take over for his brother early instead of waiting for his assigned time slot.  He wasn’t in the mood yet to hook up with anyone.  But his intended offer slid to the backburner as his roaming gaze landed on a spanking bench at the back of the room and he went rigid in disbelief.  Slamming to a stunned halt as he reached the bar, he took a moment to confirm it was Tam’s slender, toned body draped over the apparatus, her long black braid hanging over her shoulder and her smooth limbs bound in leather cuffs.


Disbelief morphed into anger, his defense against the kernel of lust that gripped him, just like when he’d caught her spying on him.  Wrong, that’s just plain wrong, he couldn’t help thinking.  Tam, his Tam had no business being in his club.  This was the young girl he’d taught to ride, the teenager he’d given driving lessons to and stood up for against her randy prom date.  The same young woman he had cheered on at jumping competitions and praised for earning a college scholarship.  The echo of her laughter reaching his ears from across the fields as she rode with carefree abandonment resonated in his head.  That innocent, exuberant girl had no business bending over a spanking bench with her tight black skirt hiked up enough to reveal the sweet under curve of her buttocks.
Connor took two steps forward, intending to lay into both her and Devin and stop them before either could take whatever they were doing one step further, but found his path blocked by his brother’s large frame and scowl.  “Get out of my way,” he snapped, his jaw tightening with frustration.
“Take a deep breath and think, Connor.  She’s here as Nan’s guest and isn’t complaining.  I should know as I’ve been keeping a close eye on her.  Devin is just showing her the ropes.”  Caden’s gaze turned sympathetic.  “She’s not a kid any more.  Didn’t you learn that when she took off?”

SUBMITTING TO THE SHERIFF, Cowboy Doms, book two is out - just in time to share a sexy tidbit with you on SATURDAY SPANKINGS.  Fans of book one, Caden and Sydney's story, will be pleased to know it's Sheriff Grayson's turn for his HEA.

BLURB:
After overhearing two crooked Chicago cops plotting against her, Avery Pierce goes on the run, not knowing who she can trust. When her low finances force her to take a job as a sex phone operator, she struggles with her inexperience. When a caller senses her desperation and inexperience and offers assistance, she’s tempted to agree.
As soon as Sheriff Grayson Monroe meets the new waitress at his favorite diner, something about her strikes a familiar chord. When he sees her enter The Barn, his BDSM club, the desire to get to the bottom of her evasive eyes and answers to his probing questions takes hold. He’s determined to find out who she really is and what is troubling her.
After an icy mishap, Master Grayson has finally run out of patience. One way or another, Avery will tell him the truth. But is it too late? Has danger already found her? Can Grayson come to her rescue or will she lose everything she has just gained?
Publisher’s Note: This is book two in the Cowboy Doms series but can be read as a standalone. This contemporary western romance is intended for adults only and contains elements of power exchange, adult language, sensual scenes, danger, mystery and suspense. If any of these offend you, please do not purchase.

SHORT SNIPPET:
The first few slaps did nothing more than tingle and warm her skin, stirring the results of the previous swats. Avery blew out the breath she’d been holding, relaxed and embraced the oddly arousing sensations coming to life with this new experience. She soon forgot about the risk of being seen, her mind centered on his hand connecting with her backside in a steady volley of titillating smacks that warmed her both inside and out. He stopped to rub her pulsating flesh, lulling her into further complacency she should have been leery of. Her sigh of pleasure ended in a gasping lungful of air as he resumed with a harder swat that stung briefly before disappearing. Shifting her hips against the instant burn, she groaned in frustration of a nameless yearning as his leg tightened over hers.
“Lay still,” Master Grayson admonished, delivering another smack hard enough to bounce her buttock.
“I’m trying,” she snapped and then cried out as he showed his displeasure with her tone by administering a smarting blow on the under curve of one cheek. “Sheesh!” Avery wasn’t sure if her startled exclamation stemmed from the blistering pain of that reprimand or the way her copious juices oozed from her empty pussy as a result, her response rattling her. Latching onto his leg for added support, he rocked her body forward with two more butt covering swats, each one a touch harder, turning heat into fire.

Thank you for joining me today!