With book 3 in my Miami Masters series, MASTERING HER FEAR, slated to be released January 12th and book 1, BOUND AND SAVED, now in paperback, there's a lot to celebrate!  How about an excerpt from MASTERING HER FEAR?

BLURB:
Julie Martin pulled on Jackson Davenport’s protective urges the minute he stepped outside and saw his five-year-old neighbor go flying off her swing to land in a heap of gangly arms and legs then come up smiling.  When he discovered how her parents pressed her into competing in beauty pageants for their own selfish gratification, he took it upon himself to provide her with the friendship the little girl craved.  Years later, just when his adult feelings, and body, began to crave more from the beautiful young woman she grew up to be, Julie moved away to take the modeling world by storm.  Jackson’s first encounter with the changes in her broke his heart and he severed all ties with her.
Six years after Julie lost the most important person in her life, she returns to Jackson a broken woman, unable to cope with the nightmare that changed her life forever.  When he discovered her penchant for cutting herself to deal with the fear, he showed her a new side of him she’d never seen before, and a new way to get through the darkness that continued to plague her.
Even though Julie embraced Jackson’s dominant sexuality and the way his painful administrations worked much better at calming her fears, the truth of what happened the night her two friends were murdered stood between them.  Would she be able to set aside her guilt to tell him the entire truth, or would she once again lose the only person who could complete her?

Excerpt:
Jackson couldn’t decipher what Julie’s grimace meant or why the mention of orgasms would make her muscles tighten, but he could pull the cause from her later.  Today was for demonstrating.  Sliding his hands around to her buttocks, he kneaded the soft flesh, keeping a close eye for her response.  “I enjoyed spanking you the other day.  You did too, which means you’ll like this.”  He released her ass to pick up a multi-strand flogger and trailed the narrow leather strips over her breasts.
“Is that what I think it is?” she questioned with a catch in her voice.
“I don’t read minds, Julie.”
“And I might be green about your sexual preferences, but I know what a flogger is,” she returned, her voice going breathless as he tickled her waist then glided the leather strips up the inside of one leg.  “But I’ve never felt one.”
“This one has twelve strands, long and thin to cover a larger area.  Spread your feet wider and leave them there.”  She complied without hesitation, another positive sign.  Jackson moved to stand at her side, teased the globes of her ass with another slow trail of the braided leather then pulled back to deliver a light snap over both cheeks, just hard enough to leave faint pink stripes behind.  “You good?”
“Yes, yes, I’m fine.”  The rows of tiny stings that stroke elicited drew her nipples into tighter beads and added to the building dampness in her pussy.  Julie bit her lip again, waiting in anticipation for the next strike.  It came fast, this one a little sharper, landing below the first, the extra punch seeping deep inside her and pulling a response she never dreamed possible.  “Jackson.”
His low, knowing chuckle near her ear vibrated deep inside her.  “Feel, baby, just feel.”  Jackson removed his body warmth off her backside and replaced it with the fiery heat of the next lash. 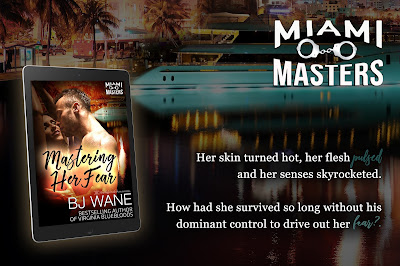