Welcome to another round of Saturday Spanks!
I've returned with another hot snippet from my
new release, BOUND AND SAVED.  Zach has
rescued Sandie from the thugs her stepfather
sent after her and is about to demonstrate what
happens when she puts herself in harm's way. 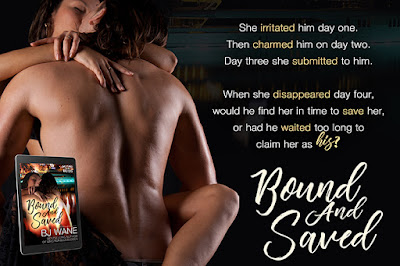 
A few weeks after witnessing her stepfather order a cold-blooded murder, Cassandra Bowlin hides aboard a luxury yacht to flee the men after her. Dashing into a closet, she trembles in fear of discovery until the owner enters the room with a woman intent on gaining his sexual favor. The scene she witnesses between the couple leaves her shaken with arousal, making her wonder what all she had been missing from her own sexual encounters.


Zachary Allen-Vancuren returns to his new, BDSM decked out yacht, eager to take her out on a maiden voyage before presenting her to his friends. After putting several miles between him and the mainland, he slips downstairs and finds he’s stuck with a stowaway with secrets she refuses to divulge and a determination to wring as much from his planned four-day excursion as possible. His refusal to engage in any sexual activities is met with her constant, teasing antics until she finally wears him down and he gives her the lesson she thinks she’s been wanting. It took interference from a surprising source and two rescues by Zachary to free her of her stepfather’s threats and enable her to embrace a future with the one man she hadn’t been able to resist.

Without removing his fingers, Zachary shuffled Sandie toward the sofa, removed the tight band of his arm and nudged her forward with a press between her shoulder blades.  “Brace yourself against the back.”


She’d never felt so decadent as she did in that moment, naked, bent over the couch with her shins resting against the seat’s edge and Zachary’s fingers still buried deep inside her butt.  That was, until he lifted her right leg and instructed her to place her foot on the cushioned seat, the position spreading her buttocks and leaving both her dripping pussy and filled back hole wide open and on display.


“Now?” she asked, turning her head and flicking him a hopeful glance to go along with the needy plea.


“No.  Punishment first, pleasure second.”
The quick, sudden withdrawal of his fingers followed by a blistering smack drew a startled yelp, but the instant, searing pleasure/pain sent her arousal spiraling out of control.  “I can’t…”  She teetered with the next smacks then breathed a sigh of relief when he snaked his free arm around her hips to steady her for his assault.

Thanks for stopping by.  Be sure to check out the rest of this blog hop for more tantalizing sneak peeks!