CLAIMED BY THE CAPTAIN 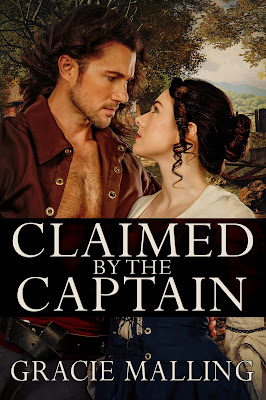 Blurb: When Captain Thomas Edwards returns home after twenty years at sea to take ownership of the White Hart Inn following the death of his father, he has not even reached the edge of the village before he comes across a miscreant stealing apples from a local farmer’s orchard. Upon discovering that the thief is a young woman named Ellen who has been employed in his father’s inn for years, he considers it his responsibility to bare her bottom and spank her soundly.


In addition to working as a servant at the White Hart, Ellen has become known for her skill as an herbalist, and the last thing she needs is a stern sea captain getting in the way of her curing the ailments of her fellow villagers with a potion or tonic when the need arises. But despite her shock at being punished in such a shameful manner for nothing more than stealing a few apples, to Ellen’s surprise the painful chastisement leaves her aching for Thomas to take her in his arms and make her his.


Despite his willingness to spank her bare bottom whenever he feels it necessary, Ellen finds herself falling deeper in love with Thomas with every passing day. But when plague strikes the village and a witch finder is summoned, Thomas forbids Ellen from using her herbs to aid her friends and neighbors. As the situation grows more desperate, will she disobey him and put her skills to use even if it means risking her life, and can he keep her safe if she does?


Excerpt One: He hadn’t expected her to give in easily and so he wasn’t surprised when she attempted to dart past him and get to the door.


“Oh, no, you don’t,” he said, catching her around the waist with one arm. She let out an incoherent cry of outrage and tried in vain to wrench herself free. Thomas could feel her heart pounding against his arm.


“Calm yourself, Ellen!” he scolded, as he pulled her toward the wooden table in the middle of the room. “Anyone would think you had never been thrashed before.”


Thomas could scarcely believe her. It seemed incredible that she could have reached adulthood without being chastised at least once. “Well, if that is true, I will soon remedy the situation.”


“You… will… not…” she ground out, still struggling against him with all her might.


“I will,” he said, holding her down over the table and pulling up the back of her dress. “I am your master and it is my duty.”


Ellen wriggled and kicked her legs but Thomas held her fast, unfastening her drawers with one hand and then doing his utmost not to stare at her beautiful bottom as the white fabric fell away. She gasped and froze under his arm. He could only assume it was the shame of being exposed in this way.


“How many apples did you steal, Ellen?” Thomas arranged himself into the right position, still holding Ellen in place.


He tapped the belt lightly against her bottom and she flinched. “Shall we say a dozen?”


“Please…” All of her bravado seemed to have abandoned her.


Thomas drew back the belt and steadied himself. He had an urge to go easy on her, to be merciful—if this was indeed her first time, it would be a great shock.


But no. This was a punishment. It was his duty to keep her safe and he couldn’t fail her now.


Thomas pressed his lips together and then brought the belt down hard across her bare bottom.