Thank you for stopping by Saturday Spanks!  My tidbit offering today comes from my new release, DANGEROUS INTERFERENCE. 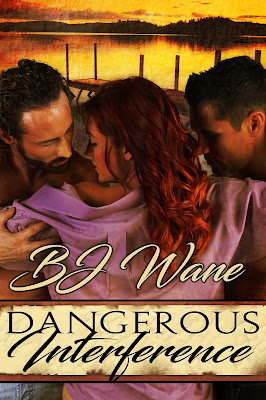 After her sister goes missing, Alena Malloy travels to Blue Springs, Maine—her sister’s last known location—to track her down. As she begins her search, however, Alena’s efforts quickly bring her into conflict with Randy Janzen, the local sheriff, and Nash Osbourne, a Scotland Yard detective involved in the case due to its similarity with a recent disappearance in the UK.


Randy and Nash make it quite clear to Alena that they expect her to avoid interfering with their work, and when she defies them one time too many she earns herself a painful, embarrassing bare-bottom spanking. The humiliating punishment ignites a powerful desire in Alena, and despite her sore backside she finds herself yearning to be mastered more thoroughly.


The two stern, handsome lawmen agree to share Alena, and soon enough she is begging for more as she is taken long and hard by both of them at once. But when Alena’s continued meddling in the investigation puts her life in grave danger, will Randy and Nash be able to protect her?


My eight sentence snippet takes place after Alena defies the sheriff's order to move her boat from the private cove where she had been spying on the lake house where her sister was last seen.

Just because Bryan no longer hung around outside didn’t mean Randy could let this infraction slide, nor did he want to. His palm had itched to connect with Alena Malloy’s ass since she’d stormed out of his office two days ago. Coupled with her insistence on jeopardizing his and Nash’s plans to keep attending Bryan’s parties as guests in the hopes of uncovering something that would give them a new lead, she had just forced him to act on his threats.


Leaping aboard, he stalked right up to her and glared down into her wary but defiant green eyes. “You deliberately defied my order, Alena. As I don’t think just issuing you another warning will do any good, you’ve left me with no choice but to act.”


He surprised her with a yank that brought her into full frontal contact with his rock-hard body, then shocked her when he made good on his threat as he twisted and bent her over one muscle-bulging arm. But it was her body’s response to the painful smacks he leveled on her upturned butt that astounded her, the unmistakable arousal simmering beneath the heat building across her buttocks impossible to ignore or deny.
Buy Link:  Amazon

Don't forget to check out the rest of this bloghop!