Guest post:  Morganna Williams starts off my week of hosting some awesome authors with a look at her newest release, CAPTIVE DESIRE.

Check out this sexy cover and even sexier excerpt! 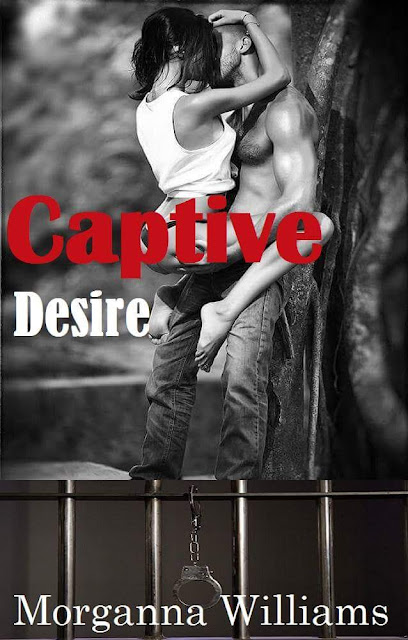 Jack and Morganna are at it again, tag teaming up a set of stories for you!

In our first tale, Laurel McGovern is a timid woman who's been raised by her overbearing uncle, Albert. Even as an adult, he kept her under thumb, working for him and living in one of his buildings. But all of that is about to change...

Mark is used to having his way with women. When one catches his off-guard and ties him up, a mixture of anger and lust form inside of him. He needs his mystery Goddess, in many more ways than he can explain. What happens when he discovers the timid waif Laurel is his fierce Goddess?

For our second story, we find ourselves in New York, circa 1962, following the Lust demon Roxanne yet again. Her master, Beelzebub has sent her here with one task in mind - to execute the assassination of JFK. Now what she does as long as that task is performed is up to her.

With New York and Dallas as her playgrounds, Roxanne rediscovers the humanity inside of her that one Captain Argus Fletcher helped cultivate centuries prior. Will Roxanne submit to her master's will? Or will she find the inner strength that's always been just beneath the surface. Red With Lust answers all these questions, and more!

*Publisher note - Captive Desire is a re-mastered edition of a web story first published on author's blog. This book contains spanking of adult women and sexual situations, if this offends you do not buy this book.

All he remembered was a curvy woman with a riot of untamed curls falling around her masked face. He’d been at the Annual Masquerade Ball benefiting the Children’s hospital bored when she’d walked up and offered him a glass of champagne.

Her throaty voice had shot straight to his groin, “You look thirsty.” She’d said with a smile, an impish dimple winking in her cheek as she looked up at him. Mark had wanted her with an intensity he’d never before known; everything in him aching to possess her…he’d been looking forward to unmasking his temptress, he knew that but then his memory got fuzzy.
How had he ended up here?

Mark looked up at the hesitant voice from the doorway. It was her, the light from the hall behind lighting her glorious hair on fire.

She sighed, biting her lip pensively, “I’m sorry for drugging you, the man I got it from promised it wouldn’t hurt you and that you’d only be out for a small time. I took the chance because it was the only way I could think of to get you here.”

“You couldn’t have just asked me up?” he asked incredulously.

“Not without properly introducing myself. I didn’t want to do that…I wanted a night of fantasy.”

He frowned, suddenly more than a little nervous, “What exactly is your fantasy, lady?”

She smiled, revealing the small dimple in her left cheek that had driven him wild earlier, “You are.”

“You’re my fantasy,” she said simply.  “I’ll go get you some water from the fridge in the other room.”

She hurried out of the room and he was left staring at the empty doorway. Mark hated feeling helpless but he was intrigued by the idea of being the fantasy of this Goddess. He decided to go with it and see what happened sure he’d get the opportunity to take her to task for having the audacity of basically kidnapping him and tying him naked to a bed.
His eyes narrowed as he thought of how dangerous this could have been for her if she’d chosen a different type of man to play these games with; Mark would definitely paddle her ass but another man might have really hurt her.

Mark was surprised how angry the thought of another man touching her made him, the possessiveness he felt for a woman whose name he didn’t even know was unusual for him to say the least.

His Goddess returned to the room, leaning over to lift his head for the water…the scent of jasmine and vanilla enveloping him. She helped him drink most of the bottle before he signaled that he’d had enough.

Mark was surprised how much he wanted her back leaning over him when she moved away. He wanted to wallow in her scent until it covered him, became a part of him. He shook his head with a frown. What was wrong with him? Whatever drug she’d slipped him must still be affecting him.

“I promise you won’t be hurt,” she said softly studying him almost wistfully.  “I just wanted to be with you without revealing too much of myself. This was the only way I could think of to accomplish that, but I don’t want to hurt you...far from it”

He watched her as she stood, setting the bottle on the nightstand by the bed. She was dressed in a creamy silk robe, and by the interesting movement of her body, he surmised that beneath it, she was nude.

Those golden curls hung down her back in a tousled mass that begged a man to lose himself in it. The silly mask from the ball still covered the top part of her face, yet something was familiar about those lips and the dimple…a memory niggled at the edge of his mind but he couldn’t quite catch it.

Suddenly, she seemed quite unsure of herself as she stood there fidgeting with the belt on her robe. His Goddess was showing signs of bolting.

Mark realized he didn’t want her to chicken out; his cock was so hard with need it stood at an almost ninety degree angle…he loved the way her eyes darted to and from his raging erection a slight tinge of pink filling her cheeks.

He desperately needed her to finish what she’d started…he could sort it all out later…sort her out…but now, he wanted everything she’d been subtly promising from the moment they met.

Laurel’s chin lifted defiantly at the challenge in his tone. He was right, sweet little Laurel would never do anything so bold, but tonight she wasn’t Laurel.
She was the Goddess he’d just called her and could do anything she wanted.

She felt him watching as her determined fingers moved to the sash of her robe, “Just so you know … when I get loose, I’m going to paddle that sweet ass of yours … and then, I’m going to take you, until you beg me to stop.”

Thanks for sharing, Morganna!
Posted by BJ Wane at 12:13 PM