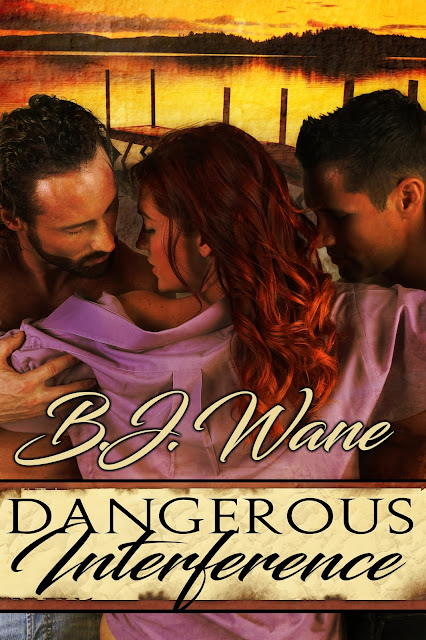 
It didn’t take him long to spot her boat rental moored in an alcove around the bend from Bryan’s private dock. Shaking his head, he counted himself lucky she didn’t realize she wasn’t as hidden as she thought. Pulling into the entrance to the Hirst property, clearly marked with a sign and double iron gates barring entry down the long graveled drive, he hopped out of his Jeep and bypassed the gate on foot through the woods. A few minutes later, he found her crouched at the back door, using a nail file as she attempted to jimmy the lock, curses flying right and left as she met with failure at each small twist.


Bent over, he took a moment to admire her lush ass nicely displayed in loose, thin shorts, her long legs conjuring up fantasies of the feel of those soft thighs clutching his waist as he rode her hard. He took another moment to indulge in a few more scenarios before he forced them to the back of his mind in order to focus on the problem at hand.


He grinned, anticipation zinging through his veins as he stepped forward and took her by surprise. “Problem, luv?”


With a squeal that made her blanch in mortification, Alena whirled around and found Nash Osborne not two feet from her. How the hell had he snuck up on her? Those cobalt blue eyes held amusement, but the stern set of his very enticing mouth told her she was in trouble. Again.


Taking heart he wasn’t the law, just a friend of the law, she bent to retrieve her purse and dropped her nail file in it, trying to act as if she hadn’t been caught doing anything illegal. “No, English, no problem. Just out for a stroll, thought I’d ask for a glass of water, but it appears no one’s home, so I’ll be on my way.”


She moved to walk around him when he wrapped his large hand around her upper arm, stopping her with his gentle, but firm grip. Glancing up, his look confirmed she was in trouble before he spoke.


“Had a nice chat with the beauty shop owner, Cora Sue, I believe her name is. You’ve been prying again.”


She refused to give him the satisfaction of trying to pull her arm free and failing to break his hold, so she stood her ground and pasted on a cool look of unconcern, she hoped. “I told both you and the sheriff I was going to find my sister, or a lead to her whereabouts. I’m not leaving until I get something I can give to the Portland PD.”


The smile that creased his lean, tanned face sent a shiver of warning down her spine and a warm gush of heat between her legs. Oh, good Lord, she almost groaned aloud. This couldn’t be happening again, not with the same reaction to a different man.


“You have two choices. I can haul you into town and to the sheriff and let him know I caught you attempting a break-in of one of Blue Springs’ finest residents in another attempt to hinder his investigation, or you can suffer the consequences of your actions the old-fashioned way again.” Nash almost made the mistake of chuckling aloud when he dropped that hint he knew of Randy’s discipline and her eyes widened in shock, and just a touch of arousal.


Heat curled low in her abdomen from the look in his eyes, his suggestion responsible for the warm pulse flooding her sheath with moisture. Was she turning into a spanking slut or was it just these two men whom her radar had zeroed in on and refused to let go?


“Randy already tried that,” she responded, attempting to defuse his intentions and regain her sanity.


“An introductory lesson, from what he relayed to me. I won’t be as nice.” Turning, he sat on the small glider, keeping hold of her arm as he looked up at her. “What’ll it be? Bend over my lap or a trip to see the sheriff?”