It's always a privilege for me to host Megan Michaels with a new release.  A long-time fan, friend and awesome author, she's been a constant source of support and advice to me over the years and I so love her books!  Check out her newest title, CARNAL INDULGENCE, a sure winner from the excerpt she's gifted us with today! 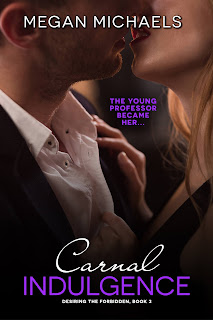 Thanks for having me on BJ.  This is the third book in Desiring the Forbidden.  This is Maddox and Libby’s story and their wedding, which we’ve all been waiting for.   Maddox’s mother, Pamela has been giving Libby trouble, she doesn’t like that Libby is fifteen years older than her son. But her husband, Maddox’s father, David isn’t going to tolerate her behavior.  I hope you all enjoy this excerpt.


You know better than to act like this. I thought we solved some of these issues years ago. Apparently, you need a bit of a reminder. I refuse to let you act like some hoyden and ruin our relationship with Maddox. I just won’t allow it. I think we need to go to our bedroom.”


He can’t be talking about spanking. We haven’t done that in years.


“Why do you think? And if you fight me on it, I’ll handle it right here in the living room.” David pointed to the back of the couch.


He chuckled. “You apparently forgot, young lady. You’re never too old. I don’t care if we’re eighty—if you deserve a whipping, you’re going to get one. Trust me on that. Now it’s up to you, but I think you’d be more comfortable on our bed, than over the back of the couch. The choice is yours.” He raised his eyebrows at her.


He hadn’t used that voice to her in years, and she forgot how it made the butterflies start in her belly. Her clit throbbed, instinctively she clenched her buttocks, and she had no doubt in her mind that he’d follow through with the threat.


“Fine! The bedroom.” She stomped past him, her feet pounding the wooden floor. He’d see how difficult she could make his life. She wasn’t some newly married woman, who needed a keeper. Hell, for years she ran this house while he worked sixty hours a week, she didn’t need him to take the lead role bossing her around then, and she certainly didn’t need it now. She had carried on just fine without his interference.


As soon as she entered the room, she put her hands on her hips spinning around. “David, this is insane. I refuse to do this.”


Both his eyebrows shot up. “You refuse. The rules have been in place for this family for years; you don’t get to disrespect someone and upset them to this degree without consequences. Have these or have these not been the rules of the house?”


“Well…yes, but they don’t count for this situation.”


Pam stomped her foot on the floor—hard. “Don’t laugh at me. I mean it. It doesn’t count because it’s regarding our son, that’s why.”


“First. Don’t stomp your feet at me again or I’ll add the paddle after the belt. Second. You’ve never been allowed to berate someone in defense of the children. I seem to remember a certain young lady getting a good ass whipping for making a second-grade teacher cry. That was you, wasn’t it?”


“You know damn well it was me, David. Don’t patronize me. I’m in no mood. This is serious!”


“Indeed. It’s severe. Let me ask you a question.” David readjusted his stance. “How would you feel in two months if you weren’t invited to Maddox’s house for Thanksgiving or Christmas?”


Pam didn’t like the thought of it—at all. She always pictured herself as the loving and kind mother-in-law, understanding and accommodating. She didn’t want to be like her mother-in-law.


David walked up to her tilting her chin up. “Exactly. You don’t want to be like my mother. You always swore you would do whatever was necessary to keep your children and grandchildren close. Here’s your opportunity, honey. I’m not going to let you ruin it. You’ll be sitting on a sore bottom for a couple of days as a reminder of how a very grown woman is supposed to act. Then we’re going to see if we can help them with wedding plans, spending time with them so you can prove what a wonderful woman and mother-in-law you are—but that will occur after I blister your ass. Clothes off. You won’t need them again for the night.” 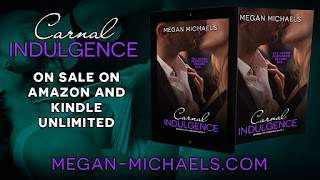 
For Elizabeth, being forty-one years old, two years past a divorce, and single had been depressing enough. But finding someone who could give her what she needed made her prospects even worse. The chances of landing a man with the courage to force her to confront her deepest, darkest fantasies of deep submission and strict discipline were about as likely as winning the lottery. Twice.


Dr. Maddox Parks was used to meeting women — a lot of women — as part of his job. As a professor only a few years older than many of his students, he’d had to contend with more than one proposition from a nubile young college student — and it wasn’t always an unspoken exchange for a good grade either. He preferred older women though, and always had, so coolly rebuffing those clumsy advances was easy. Despite the steady stream of come-ons, and flirtations, he’d begun to despair he’d ever meet the type of woman he really wanted — and needed.


That had all changed the moment the curvy, dark-haired Elizabeth sauntered into his classroom.


Maddox thought he’d convinced Elizabeth to embrace the fact he was fifteen years younger than her. He’d even seduced her into enjoying — and thriving in — his ageplay tinged D/s dynamic. But those had been the easy parts. Now, four years after they’d first met, they were planning a wedding.


Something had changed with their engagement though — and not in a good way. Was it simply Elizabeth having cold feet about their impending nuptials, or was it a much deeper problem? Perhaps it was the delicious irony of a forty-five year old woman playing the “little” to a thirty year old Dom? The big event was going to be much more than a mere wedding though, the silver collar in his dresser drawer just waiting to be placed in its rightful place around Elizabeth’s neck. Could that be the issue?


There was one thing he was certain of however: his controlling, difficult mother was going to be a problem...


Publisher’s Warning: Intended for mature readers. 18 and over only!


If you have a membership to Kindle Unlimited this book is FREE!