It's SATURDAY SPANKS time again and I'm back with a peak at my new release, RETURNING TO HER MASTER. 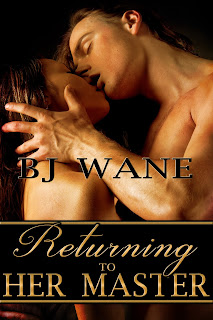 BLURB:
Marc Taite is shocked when Cassie Edwards, the only girl he’s ever loved, suddenly shows up in the club room of his Colorado vacation lodge. Ever since she broke off their romance without explanation and refused to answer his calls, he has wondered what went wrong, and he hauls her upstairs, intending to spank her soundly and then get some answers. Their old passion instantly reignites, however, and instead of taking her over his knee he ends up taking her hard and fast.

The connection they once shared clearly still exists, but Marc has already lived through the pain of losing Cassie once, and he is determined not to let himself be hurt again. Desperate to prove that this time she is truly ready to belong to him, Cassie promises Marc her complete submission, and she soon finds herself on her knees with her bright red bare bottom on display as she begs him to claim her in any way he pleases.


Though he is reluctant to risk his heart again, when Marc discovers that a stalker has followed Cassie to Colorado his need to protect her quickly overcomes his hesitation and he takes it upon himself to keep her safe, even when that means punishing her sternly when she breaks the rules he makes to protect her. But when a misunderstanding sends her fleeing from him once again, will he lose her a second time?

Struggling to set aside his irritation at her unexpected arrival, he turned her toward the wall, pulled her hips back and shoved her feet apart.  Grabbing her hands, he braced her palms against the wall where his had been.  “Don’t move.”  Flipping up her skirt, he swatted her ass as he released his cock before common sense and caution overruled his body.

“Oh, God,” Cassie groaned, lowering her head between her arms, lifting her butt for his next swat, embracing the familiar burn, ecstatic her response to the blistering pain was just as she remembered.  One hard, calloused palm pressed against her stomach while he belabored her buttocks with the other, his swats coming faster, harder, his concentration on her butt exciting, his silence unnerving.

Her sharp cry following a painful slap on the sensitive skin of the under curve of her right cheek echoed in the loft, the harsh intake of his breathing sending a shiver down her spine.  “Please, Marc,” she whispered, wishing she could see his face yet glad she couldn’t.  Her conflicting, roiling thoughts couldn’t compete right now with the pleasurable heat he took his time building across her butt, the throbbing of her abused flesh spiraling between her legs to be reciprocated in remembered pleasure.