Lately, I have had the honor of hosting several wonderful authors on my blog, and today I'm excited to add Katrina Kade to that list.  Today she's sharing not one, but two great excerpts from her new release, CLAIMING SKYE, and trust me, you won't want to miss these! 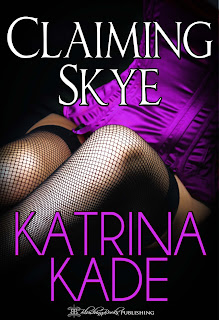 The club’s owner has seen her response before and gives Skye a folded piece of paper with an address, a date, and time. She finds herself knocking…

Elijah waits on the other side of the door. Dominant, arrogant, and lonely—he’s looking for the perfect submissive to cater to his desires and share the lifestyle he relishes.

Is Skye the one? Is Elijah the missing puzzle piece that will allow Skye to release her inhibitions and embrace her kinky side? Or will tragedy keep Elijah from Claiming Skye?


The next slap hit the other side of her ass, the pain more intense this time. Elijah had a way of spanking her, of snapping his hand against her flesh that felt more like a bite than just his flesh against hers. But it was his skin touching hers, and that's what she loved, beyond the pain.


Elijah's voice was rough, his breathing fast. She wanted to turn around, to see his face, the lust she knew she'd see. But that was against the rules. So she bent from the waist, moving her feet apart to keep her balance.


She hesitated, then pulled her left foot against her right. With her hands behind her and her feet together, it was hard to keep her balance. For a moment she wavered, the muscles in her legs tightening as she fought for control. Finally, she found her center, found her balance. Elijah touched her briefly on her leg, running a finger along the crease at the top of her thighs, beneath her buttocks, then moving his fingers between her legs, rubbing against her wetness. She closed her eyes, concentrating on keeping her balance as he slipped one finger into her. For a moment, he wiggled his finger, the fluttering feeling inside her making her gasp. Then he slid his finger out, moving it forward, slowly circling her clit.


Out of reflex, her hips jerked forward, knees buckling slightly as something clenched deep inside her. But the effort to keep her balance forced her to hold still, even as Elijah rubbed her clit harder, fingers moving faster, and despite herself, her legs tensed again, but she managed to hold her stance.


"Good girl." His voice was very close to her ear, and she realized with a start he was no longer sitting, but standing behind her. "Very good girl."


Her heart swelled with love. Elijah rarely complimented her during a scene, and it reinforced how special this was, for both of them. He struck her right cheek, much harder this time. She swayed to the left under the impact, her weight thrown to the side. With a strangled sound she dug her toes into the carpet, willing herself not to move her feet even one inch apart.


Elijah caressed her, rubbing his hand gently over her stinging skin, his other hand still buried between her legs, one finger gently thrusting into her slick wetness. The sharp pain sank into her, heating the fire that he'd lit inside her. The tension in her legs lessened under Elijah's gentle touch, both from his hand on her ass, and from his finger slowly circling her clit. She breathed deeply, trying to gain control, not to let herself let go too soon, to prolong this amazing pleasure Elijah was giving her.


But the next slap sent her reeling, her body leaning far to the right, her left foot coming off the floor. She cried out, the pain more intense than she'd ever felt, the counterpoint of Elijah's finger thrusting inside her bringing her to the edge. Her cry was almost desperate, the desire to straighten almost overwhelming.

"This is a new author to me-and after this book, I'll be reading all of her books.  I loved the dynamic between Elijah and Skye.  Their chemistry sizzled and popped on the pages."  Amazon Customer 5 Star Review


*Note: She is already blindfolded and restrained with headphones in*


Her heart beat rapidly, and every sense came alive, straining to learn what he was
doing—what he was going to do. The bed dipped again, this time on the other side. There was more movement, and then the music started again, much louder, stronger, something primal.


The music crashed as heat exploded on her stomach and she cried out, body writhing,
pulling away but then rising toward whatever it was. Whatever it was—then it dawned on her; it was wax. He was using a candle on her, dripping hot wax onto her oiled skin.
The heat was briefly intense, bordering on painful, then mellowing, spreading, sinking
into her. She drew a breath, waiting for the next drop.


She tried to gauge by the music when it would happen again, but the beat became
syncopated, erratic, rising and falling and, when the heat hit her, it took her by surprise. But her body reacted, took on a life of its own, hips rising, legs falling open against the ropes. The drops came faster, closer together. The pain didn't mellow quite as quickly; he wouldn't let it. She wanted it to stop, tossed her head from side to side, but arousal and heat swelled inside her, ready to burst. But just as the word 'red' rose to her lips, the pain changed, spread out, softened. She bit back the word, waiting for the next splash of heat, rising up on the bed, her orgasm building, heading toward some amazing peak.


Tiny pinpoint drops landed on her breasts, exquisite drops of pain that made her gasp, her body reacting instantly. The music rose, and so did her body, both reaching a crescendo and then the music ended, abruptly. And so did the heat on her skin. She lay gasping, the silence in her ears deafening, her body seeking release. He'd left her on the edge, teetering, aching. Elijah moved on the bed and she instinctively turned her head toward the movement, tugging on her restraints, aching for the next. The music rose suddenly, drowning out any sounds, growing louder. She wanted the heat, wanted the intense pain, the rush. She was sweating from the heat on her skin, from the heat that was building inside.


Cymbals crashed and she smiled, knowing the heat was coming, wanting it, craving it.
But it was cold instead, icy cold and wet, pressed against her nipple. She screamed, her
body pulling the ropes taut, goose bumps rising along her arms and legs. The fire that had built inside her rose up fierce and hot, and her hips rose off the bed, seeking release. The slap against her thigh was sharp and bright, stinging, breaking through her arousal, but doing nothing to diminish it. She gasped, her body thudding onto the bed.
He hadn't said… hadn't told her she couldn't come. But that must be what he wanted—
what she didn't understand.


The music still played, but the volume dropped considerably. There was movement again, and then Elijah's breath was warm on her face. She could hear words, tried to focus on what he was saying.

Hi! So my name is Katrina, and I’m a part time erotica author, who attends classes during the day, and writes dirty romantic erotica by night. When I’m not in school studying photography, I also work as a portrait photographer at a small local studio near the beaches of Florida.

Some fun facts about me are that I love apple martinis (I just turned 21, so I can’t get enough of them) and I love Star Wars, The Vampire Diaries, the Originals, The Walking Dead and Smallville. I’m a gamer girl too. Animals are close to my heart, and I have a 3-month-old bearded dragon named Yoda (he’s green and white) and a spaz of a dog named Nala who is a Terrier/Pomeranian mix, but I digress.