Come Back to Me: Book two in the Bound to You series
By Jane Henry 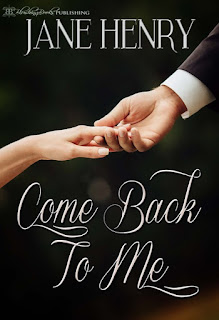 Blurb:
Meredith and Paolo are reunited after a devastating accident drove them apart, in the hopes that embracing a lifestyle of Dominance and Submission will rekindle the passion they once had. The premise is very simple: Meredith will obey Paolo, and he will enforce his expectation of her obedience.

But where do they go from here? Paolo proposes a plan that will raise the stakes, a weekend of intense training that will push them both to the edge of their limits as they embrace their new-found roles.

Is Meredith prepared to be stripped of the protective wall she's built around herself? Will she willingly trust Paolo to lead her—even if that means submitting herself to his discipline? Can Paolo be all that she needs — her leader, protector, and disciplinarian, but most of all...her lover?

She glanced at the clock. It was barely an hour before she normally went to bed and she felt nowhere near ready to go. Her emotions conflicted. She was fighting the urge to push back, claim her own decisions, and ask him why he was pushing. But the novelty of his pushing her to obey was still fresh, and curiosity got the best of her. What would he ask her to do? She stood, and without another word, started to leave. As she reached the threshold, his voice stopped her.
“Come here, baby,” he said, his voice softer now, though there was an edge that made her halt. She swallowed.
Shut it off. Get ready for bed. Come here. It was almost too much, and she felt she needed a few seconds to process. She blinked, focusing herself on obeying him. Taking a deep breath, she made her way over to where Paolo sat. He reached for her hand when she got close to him.
“Much better, bonita,” he murmured. “That pleases me, you know. When you make the choice to be my good girl.”
She felt her stomach melt.
My good girl.
“When I come to our bedroom, I want you in your nightie, no panties. And I want you kneeling by the bed, waiting for me. We have a few things to talk about.” He paused, and his eyes darkened as his voice dropped.
“It's time I gave you more rules.”

Jane has been writing since her early teens, dabbling in short stories and poetry. When she married and began having children, her pen was laid to rest for several years, until the National Novel Writing Challenge (NaNoWriMo) in 2010 awakened in her the desire to write again. That year, she wrote her first novel, and has been writing ever since. In 2012, she became interested in the d/s lifestyle, and has discovered her love for writing romance with a d/s twist. With a houseful of children, she finds time to write in the early hours of the morning, squirreled away with a laptop, blanket, and cup of hot coffee. Years ago, she heard the wise advice, “Write the book you want to read,” and has taken it to heart. She sincerely hopes you also enjoy the books she likes to read.

Other books by Jane Henry:

Thanks so much for sharing, Jane!