Another round of Saturday Spankings!
Thank you to Blushing Books who have picked up my Virginia Blueblood Series and are starting with the re-release of Book One, Blindsided.  Available for a low introductory rate of just $2.99, this 96,000+ word book has already received numerous 5 star reviews!  Just in time for the new release of Bind Me To You, Book Two in two weeks, you won't want to miss getting your copy soon! 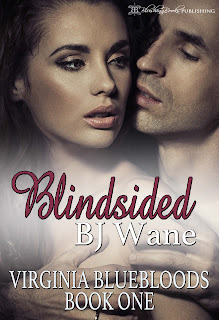 
Eve Sawyer had a bright future ahead of her when a tragic accident costs her everything.  Now, twelve years later, desperation for all she has been missing compels her to seek comfort and pleasure in the arms of strangers.  A few hours indulging in anonymous sex with a man named Nate gave her more pleasure than she ever dreamed possible; unfortunately past experiences with men hadn’t given her any hope that night could ever lead to anything more.  After meeting Nate again and succumbing to his erotic coercion to enter into a sex-only affair, she soon discovers all the different ways a man with a creative imagination can give a woman with limitations the exciting, pleasurable adventures she has been craving.
Nate Radcliff never had trouble forgetting a woman once he left her bed until he spent the night having sex with a woman who insisted on keeping her name a secret and her face hidden in the dark.  A few weeks later, a chance encounter has him coming face to face with the woman he has been obsessing about, and with the fact she is blind.  Immediately struck with admiration for the lengths Eve is willing to go to to brighten her dark world, he becomes determined to give her the adventures she craves.
For weeks Eve basks in the decadent pleasures and adventures both Nate and his friends give her, making sure she keeps her heart guarded from hoping for more, even when Nate insists their sex-only affair has grown into something more for him.  But Nate wasn’t one to give up, especially when he wanted someone as much as he wanted Eve.  Just when his persistence starts to pay off and Eve becomes open to a future with him, her best friend, Holly, returns to town, her jealousy and possessiveness threatening to drive them apart.  Eve refuses to believe anything bad about Holly, the only person who has stayed faithfully by her side through thick and thin, which drives a wedge between her and Nate.  In the end, Eve’s refusal to see her friend’s true motives comes close to not only costing her the man she loves, but to costing her life.
Enjoy this little scene between Nate and Eve when Nate finds her too irresistible to ignore as she fixes their dinner wearing nothing but a sheer apron!


Replacing the lid, she shifted to the side only to feel Nate behind her, his large body warming her bare, exposed backside, his hard, denim covered cock pressed against her ass.  “Mmm, is that an appetizer?”


Nate leaned back, swatting one delectable cheek.  “And possibly dessert if you’re wearing nothing but that apron through dinner.  Bend over.”  He pressed between her shoulders until she was laying over the high stool, her hands grabbing the legs, her ass perched high on tempting display.  “I was right.”  He slapped the opposite cheek then ran his finger over her slit, finding her wet.


“About what?”  Eve moaned when he spanked her several more times in rapid succession, raising a heated burn across her buttocks that fed the lust simmering as hotly as her stew.
“About how wet you are from walking around in nothing but this flimsy, see through apron.” 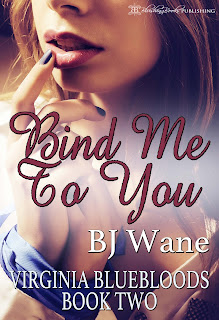 Available at:
Amazon
Blushing Books
Be sure to check out the other great blogs on this hop!
http://bjwane.blogspot.com/2016/04/satspanks-virginia-blueblood-series.html
Posted by BJ Wane at 11:30 PM