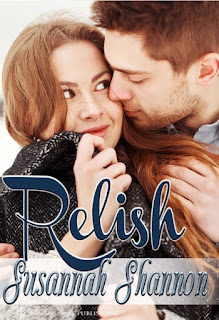 Cass Nelson has gotten used to blizzards, wolves and being an outsider in Slicktrench Alaska. While she couldn't be happier in her marriage to Killian, the arrival of a surprise package is a potent reminder that her marriage isn't like the relationships her friends all have. She might not understand this whole being a submissive wife business, but she does understand that she can't imagine living a life without the man she adores even if he lights up her bottom on a regular basis. Busy with helping to run the lodge and posting on her very popular Cass Cooks blog, her life tips upside down with having to deal with Killian's brother who is marrying a woman that nobody likes and an IRS auditor nosing around the lodge. Just when Cass has decided that the best way to insure a happy marriage is to totally give up her own dreams, she is offered her own TV show. Her decision to not share this information with her husband will cause all sorts of different kinds of reverberations. Will wedding bells ring and is that howling coming from the wolves outside or the wife inside when her husband discovers that his precious wife is holding back her own secrets?


YOU HAD NO IDEA ALASKA COULD BE THIS HOT!

1.There was a photo album her mother had sent. Cass’s mother had been a serious scrap booker all of Cass’s life and the digital revolution had hit her hard. She just could not give up her deckle edged scissors, so her children still received fussily decorated scrapbooks several times a year. She set the stack of bills aside and turned her attention to the other package. It had been shipped to a C Nelson c/o a post office box. Cass wasn’t aware of having a PO box. Maybe it just automatically happened when you moved here, she thought. She used a spare key that was deep in the recesses of her bag to slit open the paper tape. Digging through the packing peanuts she spied something that was bright blue. She reached in and to her amazement was pulling a small bright blue paddle out of the box when the passenger door swung open. She stuffed the vividly colored contraband back into the box with such force that she broke though the bottom of the parcel. She had unleashed a torrent of static ridden packing peanuts that suddenly seemed to fill up the jeep. “What’s in the box?” queried her mother in law. Cass tossed the box over her shoulder. It arced, leaking like a rocket shedding jet fuel , into the back seat. Cassandra spat out a packing peanut. As per usual when she was caught off guard she began to babble. ”Mom sent me a scrapbook­ you can’t see it now. I’ll show you later, but I’ll definitely show you later. Nothing to hide.” She cackled like a lunatic of criminal intent. “Or maybe the cake pans were in here. I’m not sure. Something was in there. But it really doesn’t matter. We have to get home right now!” Hazel was deep in her own thoughts and barely seemed to notice the bizarre behavior of her daughter in law. Cass was unsure how she would distract her mother in law long enough to smuggle into the lodge the S&M contraband that she had apparently been too drunk to know she was having delivered to the PO box that she didn’t know that she had. She needn’t have worried. Hazel said, ”Oh, I forgot to put clean towels in cabin 2 I’ll unload the jeep later” and nearly threw herself out of the still moving jeep as soon as they were through the open gates of the lodge.


2. Closer inspection gave her pause, however. Libby looked positively green, a shade horribly reminiscent of the bridesmaid dress hanging in her closet. Ava had stepped out, and the pizza coven was nowhere to be seen. Cursing the day she was born, Cass helped her to the ladies room. Cass had never seen a floor as disgusting as the ladies room at Sam’s. Not even in bars she’d frequented in college. It was a tight fit in the stall, Cass awkwardly pulled Libby’s hair out of her way, trying her damnedest to stay on her own feet. She was determined not to kneel on the floor, reasonably certain that she would become stuck fast like a fly in the world’s most repulsive flypaper. Between heaves the blonde pharmacist was mumbling to herself. Cass could not make out much of what she was saying although the name “Nelson” clearly a significant part of the conversation. Unexpectedly Libby sat back and looked blearily at Cass. “Has Kilian ever spanked you in his truck?” Cass felt a surge of jealousy. She knew that Killian and Libby had lost their virginity to each other, but she had hoped that at least one thing could be strictly her s. She surrendered to her baser nature. ”No,“ she responded and then continued, ”He has a house now.”


3..”You being embarrassed doesn't worry me at all. You deserve to be, but no one else has to be freaked out by the punishment you have earned.” he whispered as he led her out the door. She could only swallow hard, and nervously nod in agreement. It was very dark, and the ice colored trees stood up in contrast to the velvet night sky. She didn't think he would make her pull her dress up out in the biting cold. She was prepared to obey him though. She was dying to sort out the details, but now was not the time. They would have it all. Killian was giving it all to her, the excitement of a career and the security of a lifetime commitment with a real man. He led her to cottage eight­ the farthest cottage from the lodge and the one she had first stayed in back when all of this was not even imagined. He’d lit the fire, it was warm. He helped her off with her coat. She was dreading the lecture. She had been entirely in the wrong, and that thought alone brought her nearly to tears. In two steps he had positioned himself on the bed and moved her between his knees. He pulled her over tossed her skirts back. she had read a lot of “punishment journals” where women described the protocol of a formal punishment spanking, This was not that. This was a furious husband’s palm meeting the tender bottom of a wife who had disappointed him deeply. “I brought you out here, because you're going to be crying really, really loudly.” Her legs were already pinned, and he slapped her bottom with blistering force. Over and over and over. “I'm sorry “ she wailed, with no expectation that her admission would shorten her punishment in any way. She said it anyway, because she was sorry, she was truly sorry. Killian was not appeased. He paused for a second and reached past her. “Oh my God,” she thought ­”he has a stockpile of things to paddle me with out here…” He moved a pillow closer to her.  "Go ahead, cry into the pillow as hard as you need to baby.” he resumed spanking her. "I am going to have a wife who doesn't lie to me” There were no words, she gave herself over to heartfelt sobs. she surprised herself by reaching her hand back, not to protect herself but to twine her fingers through his where his hand held her firmly over his lap. She wanted to connect with him in every conceivable way. He paused to remind her , in no uncertain terms, that she would never ever ever consider keeping things from him again. She was too overcome to even talk. She could not even answer him, she let the remorse rollout of her like a wave, carrying her along. He allowed her to cry it out, and she cried long and hard after he was finished. Once she had caught her breath he led her into the bathroom and turned her around. she could see her scorched bottom in the mirror. He ran his fingers possessively along the deeply scarlet plumpest curves. “This is what happens to girls who lie to her husband's” he lifted his hand and delivered a crisp spank. "If you can't remember unless your bottom is on fire then I will do this every day if i have to” he was back in a swatting groove again and she didn't dare move out his way. “I deserve your trust, young lady. I haven't done anything to make you think I would not move to the ends of the earth for you.”  She put her hand on his shoulder. ”Wait." she’d had a thought but it was fleeting and she needed the throb in her ass to abate so that she could mentally connect the dots. He paused. "I hurt your feelings.” she was gobsmacked. He put a finger under her chin and forced her to look into his eyes. "Yes, you hurt my feelings”

4. (G)As always happened when she was on the phone, Jen was having a conversation with Cass and simultaneously with a stubborn little person on her end of the phone line. .”How's life with Mr. Alaska?” Life with Mr. Alaska was very good, she was happy to report. Jens response blasted her eardrums, “I have already said no thirty times! Oh, sorry Cass­ not you.” “What is she trying to do?” “Leap to her death from the kitchen counter.” “why is she on the kitchen counter?” “So I can feed the dogs, ABSOLUTELY NOT,” “What?” “sorry, not you. STAY, that was for the dog. I don't tell Sadie to STAY, well, I could, but I probably wouldn't admit it in public.” “Trying to get a visual here. Who’s on the counter? Sadie or Pup?” “Sadie is on the counter, I’m holding her, of course. Pup is eating and Sadie is hell bent on snatching food out of the jaws of a Saint Bernard .” “So she’s a risk taker, like her Mom.” “Or stupid like her Mom. I have to go babe, gotta drop Sadie off at the sitter and then get to my OB appointment and then to a meeting” “Go, i have a busy day too,” which was a lie and “Love you,” which was not.


I live in the American Midwest with my family. I write romances that are funny(well, I try). I love the inner conflict of a smart, modern, independent woman who longs to submit to that one special man.
Posted by BJ Wane at 8:44 AM