I'm thrilled to welcome Ashe back with another hot, historical that's sure to please! 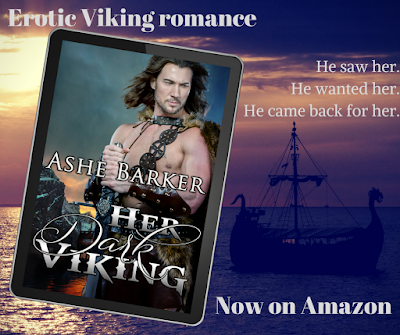 After she is captured by Viking raiders, twenty-five-year-old Mairead is left with no choice but to depend on Gunnar Freysson, the battle-hardened leader of the Norsemen, to protect her and her young children. Though he makes it clear that she is his property to do with as he pleases, Gunnar shows remarkable concern for Mairead’s wellbeing, and when she risks her life in a dangerous attempt at escape he does not hesitate to strip her bare and spank her soundly.

The strict punishment leaves Mairead thoroughly ashamed yet helplessly aroused, and when Gunnar takes her in his arms and claims her properly she cannot deny her body’s response to his dominant lovemaking. As the days pass, Mairead realizes that Gunnar cares for her deeply, and despite her situation she finds herself falling in love with the stern, handsome warrior. But can she truly give her heart to the man who took her from her home?

Publisher’s Note: Her Dark Viking is a stand-alone sequel to Her Rogue Viking. It includes spankings and sexual scenes. If such material offends you, please don’t buy this book.

I have always been fascinated by Vikings. Strong, sexy warriors, ruthless, dominant and determined – what’s not to like? It was only a matter of time before I wove a story around these fierce raiders who rampaged through Scotland and England for over three centuries, eventually settling and leaving their indelible mark on our history.

A Viking raid was indeed a ferocious affair. They relied on what would nowadays probably be termed ‘shock and awe’ swooping in from the sea on their fast dragon ships to attack with vicious and deadly effect. The Nordic raiders would be gone almost as swiftly as they arrived, leaving a trail of destruction in their wake. The modern equivalent would be a helicopter attack on a sleepy rural village by SWAT teams armed with automatic weapons– the local people would hardly know what hit them.

I have employed a certain amount of poetic license, but in writing this series of stories I have been determined to recreate the Viking era to the best of my ability – their homes, their clothing, what they ate, how they lived. I hope readers will be as entranced as I am by these creative and charismatic raiders, and perhaps forgive them their more outrageous little foibles.

Take a peak at this tantalizing peak....

"Spread your legs for me, Mairead."
"What?" She lurched within the cradle of his arms. "Why?"
"Earlier, you told me that you had much experience of what transpires between men and women. I am minded to test the boundaries of your knowledge."
"You would take me? Here? I am not sure that I am ready, after Tyra..."
"I know, and I will allow you all the time you need to recover from the birth. I can be patient, and I have no wish to harm you. But, there is more to what happens between men and women than just fucking."
"You are very direct, Jarl, yet still I find myself uncertain. What do you mean?"
He chuckled again, the sound warm and rich and very knowing. "I shall show you what I mean, but first I require you to hook your legs over each of mine and allow me to spread your thighs wide. Will you do that or must I insist on having access to explore what is mine?"
Why, when he spoke to her thus, when he half-threatened her, when she should be terrified and cringing in fear, did his soft, sensual command cause her stomach to clench and heat to flare between her legs? Why did everything he suggested to her sound so... enticing?
"Mairead? What are you waiting for?"
What indeed?
"I am sorry, master." She lifted each leg in turn and draped them across his thighs, the position already opening her to his questing fingers. He kept his left arm across her chest just above her breasts, but he reached down with his right to tease the reddish-golden curls at the apex of her thighs. Mairead stiffened, but did not move.
"Good, you please me very much. So soft, so pretty." He tugged at the curls then proceeded lower still. Mairead expected him to reach down far enough to plunge his fingers inside her since this was the usual prelude to a man's fulfilment. It would be quick, she knew that, and not overly unpleasant.
But Gunnar halted just below the downy curls. His fingers stroked, explored, caressed, as though he sought something else. He widened his own legs, and in so doing pulled her thighs further apart. He bent his knees too which had the effect of raising her up out of the water, exposing her to his gaze.
She opened her mouth to protest, but swallowed her words as a peculiar sensation overwhelmed her. Something deep and piercing, warm, intense and delicious unfurled right where he touched her. Mairead let out a startled gasp and tried to close her legs.
"No, remain still. I wish to pleasure you."
"How? I do not understand..."
"Like this." He stroked that sensitive spot again, his movements precise and knowing as she writhed in his arms. "Am I hurting you?"
"No." She shook her head. "But it is strange, I do not believe I like it."
"No? And this?" He altered the angle of his hand to apply pressure to that quivering little button, then he took it between his finger and thumb and she thought that perhaps he squeezed.
"Oh. Oh!" Her inner muscles were clenching, convulsing in a manner quite beyond her control or comprehension. "What are you doing?"
"I told you, I am pleasuring you. I intend to do this often, in preparation for you taking my cock when you are fully healed and quite ready. Will that be long, do you think?"
"I... I am not sure." Oh sweet Jesus she hoped not. His busy, clever fingers were teasing her, awakening something she had only half-understood, a dim and elusive awareness suddenly coming into sharp focus as he stroked and tormented her. As she writhed against his thighs he applied more pressure, increasing the intensity until she felt she might burst, or shatter, or simply expire from wanting.
"Do not fight this. Allow it to happen. I have you." His words were murmured against her ear, his breath warm on her neck. His lips were on her sensitive skin, kissing, licking, nipping.
"Have me? What...? Why...? Oh, oh dear Lord."
"Now, Mairead. Let it happen now."
She required no further urging, nor explanation. The sensation he had built so quickly seemed to spiral and surge within her until she could bear no more. She thrust her hips forward and her head back and let out a squeal of pure delight as waves of ecstasy washed through her. The tingling which bathed her body on the outside was within her also, coursing right out to her fingers and toes, to the very ends of her hair. She was weak, powerless to resist yet invigorated by the sensual feast he laid before her and which she now savored.
The storm of sensation soon passed. Mairead's trembling body relaxed. She lay within the Viking's arms, limp and sated in a manner she could not even start to describe. He had satisfied a hunger she had not even known she possessed, but having tasted this joy once she would never wish to be without it again.
Something had been missing before. Some mysterious secret had remained hidden, but no longer. Gunnar had shared the revelation with her and now she knew what she needed.
Who she needed.
More about Ashe Barker

USA Today best-selling author Ashe Barker has been an avid reader of fiction for many years, erotic and other genres. She still loves reading, the hotter the better. But now she has a good excuse for her guilty pleasure – research.
Ashe tends to draw on her own experience to lend colour, detail and realism to her plots and characters. An incident here, a chance remark there, a bizarre event or quirky character, any of these can spark a story idea.
Ashe lives in the North of England, on the edge of the Brontë moors and enjoys the occasional flirtation with pole dancing and drinking Earl Grey tea. When not writing – which is not very often these days - her time is divided between her role as taxi driver for her teenage daughter, and caring for a menagerie of dogs, tortoises.  And a very grumpy cockatiel.
At the last count Ashe had over forty titles on general release with publishers on both sides of the Atlantic, and several more in the pipeline. She writes M/f, M/M, and occasionally rings the changes with a little M/M/f. Ashe’s books invariably feature BDSM. She writes explicit stories, always hot, but offering far more than just sizzling sex. Ashe likes to read about complex characters, and to lose herself in compelling plots, so that’s what she writes too.
Ashe has a pile of story ideas still to work through, and keeps thinking of new ones at the most unlikely moments, so you can expect to see a lot more from her.
Ashe loves to hear from readers. Here are her social media links:
Newsletter sign-up
www.ashebarker.com
Facebook
Twitter
Instagram
Pinterest
Goodreads
Or you can email her direct on ashe.barker1@gmail.com