Thank you for joining me on Saturday Spanks,
where authors share teasing spanking snippets.
My contribution this week is from my
September 7th release, BOUND AND SAVED,
which kicks off my new Miami Masters series. 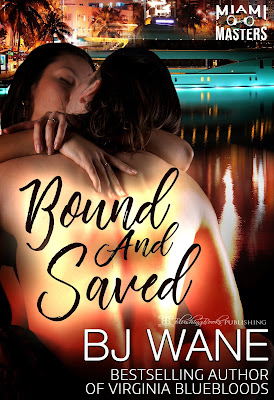 A few weeks after witnessing her stepfather order a cold-blooded murder, Cassandra Bowlin hides aboard a luxury yacht to flee the men after her. Dashing into a closet, she trembles in fear of discovery until the owner enters the room with a woman intent on gaining his sexual favor. The scene she witnesses between the couple leaves her shaken with arousal, making her wonder what all she had been missing from her own sexual encounters.
Zachary Allen-Vancuren returns to his new, BDSM decked out yacht, eager to take her out on a maiden voyage before presenting her to his friends. After putting several miles between him and the mainland, he slips downstairs and finds he’s stuck with a stowaway with secrets she refuses to divulge and a determination to wring as much from his planned four-day excursion as possible. His refusal to engage in any sexual activities is met with her constant, teasing antics until she finally wears him down and he gives her the lesson she thinks she’s been wanting. It took interference from a surprising source and two rescues by Zachary to free her of her stepfather’s threats and enable her to embrace a future with the one man she hadn’t been able to resist.
DISCLAIMER:  This book contains elements of power exchange, elements of BDSM, and explicit sexual scenes. If any of these offend you, please do not purchase this book.
My eight-sentence snippet...

“I warned you.”  Grasping her shoulders, he spun her around, placed her hands together back on the rail, and shackled them in place by wrapping his much larger hand over both hers.  Without pausing, he flipped up the shirt and swatted her silk covered ass, the thin, see-through panties providing no cushiony barrier this time.

Be sure to check out the rest of this week's titillating offerings!