Lee Savino joins me today with her new Berserkers title, CAPTURED BY THE BERSERKERS.  After reading this short excerpt, I can see why this book has received 48 five star reviews in just a few weeks! 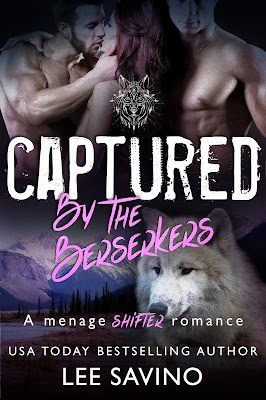 She'll be ours forever...

Long ago, a witch turned us into monsters. Our only hope is to wait for the woman who could lift the curse.

A century later, we find her. Willow. Our miracle. She's hidden away in an abbey full of orphans, while evil men plot to sell her as a bride.

We'll break her out. But she'll remain captive to her desires until we set her free...

*Author's Note: This is a standalone full-length MFM ménage romance. There are no M/M scenes, just TWO hot, dominant warriors who claim the same woman...

✿¸.*´¸✿*´¨) ¸.**¨)
(¸.✿¨*.¸¸.*`✿¤ EXCERPT ✿¨*.¸¸.*ˑ˞✿
“Soon you’ll be filled by both of us. Would you like that? Look at Leif and tell him.”
“Yes,” I moaned. Leif had his cock out now, stroking it slowly as he watched Brokk restrain my writhing body.
“We will both claim you. I will take one end and Leif will take the other. We will fuck you between us and fill you with our seed. Then we’ll put you back in the belt, needy and wanting. You will clean our cocks with your mouth and savor our pleasure as your own.”
It was so dirty, so wrong, yet my orgasm rose faster than I could stop it. His fingers played in my throbbing folds.
“Would you like that, Willow? We’ll care for you, wash you and dress you and braid your hair. We’ll keep you safe, but every day you will ache, and every night you will open your body to us. You’ll remain forever a captive to our desires.”

Read the complete Berserker Saga to see what fans are raving about...