Allison West returns this week with a look inside her age-play contemporary romance, A TASTE OF WONDERLAND. 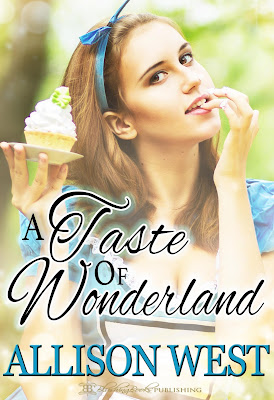 Blurb:
Alice Hall is a thirty-two-year-old writer at The Daily Chronicle. When Mr. White pays a visit to her boss and insists she visit Wonderland on assignment, Alice believes it to be a cruel joke. She soon discovers that Wonderland is nothing like what she read as a child. The owner of the Queen of Tarts invites Alice inside, feeding her delightful sweets in hopes that Alice’s article will focus on her pastry shop. It is not only dessert that the owner of the Queen of Tarts feeds her but also stories of Baylor, the owner of the local pastry competitor, The Mad Batter. He may be hot and single, but he also has a reputation for having a secret club catering to special “Littles” hidden within town.
Will Alice be able to get an invite to the secretive club and find the story that she desires to write? Despite the dangers, Alice is determined to satisfy her curiosity. Will her investigative skills be enough to keep her out of trouble or will she find her bottom bared?
DISCLAIMER: A Taste of Wonderland is a modern romantic contemporary adaptation of Alice in Wonderland, and is intended only for adults. This novel features the spanking of adult women, elements of age play, including anal play, and power exchange. If any of these offend you, please do not purchase this book.

Alice sat down, placing her purse on the floor. Her mouth watered as the aromas only seemed to further permeate the shop, making her stomach grumble. How could anyone step foot into such a store and not purchase a dessert? It was as though one could taste the sweetness in the air.
Tara approached the table with a hand-painted plate that held a small tart in the center and a shining silver fork to go along with it. Placing the plate onto the table, she sat down across from Alice. “Am I your first stop in Wonderland?” Tara asked.
Alice lifted the fork and took a bite of the tart, the taste savory and sweet as it tickled her tongue. What was in this dessert?
“Yes,” Alice mumbled between bites of tart. “Mr. White suggested that I visit with you first. Is there anyone else I should go visit next?”
“Mr. White owns an antique shop that specializes in pocket watches. You might find that entertaining. Though I must say that writing about my shop, Queen of Tarts, it would make a better story.”
Alice hungrily took another bite. She finished her tart and wiped her sticky fingers on a napkin, feeling quite thirsty. “Do you have something to drink?”
Tara headed to the refrigerator case and retrieved an antique bottle that required a bottle opener to pop the lid. She opened the drink, handing the blue fizzling liquid to Alice.
“What is this?” The outside of the bottle read “Drink Me.” She laughed, not waiting to hear Tara’s answer as she downed the sweet fruity liquid which eased the remainder of any fears she may have felt.
With a gulp, a warmth spread through Alice that made her tingle and giggle as though she were slightly tipsy. Her eyes were slanted with tiredness but she fought off the sensation to sleep. She had no bed and would require an hour’s drive home. Standing, Alice decided that it was time to go. Giggling, she could not contain her laughter as she found it hard to breathe.
“Here, I think the sugar in that tart went straight to your head. Did you not eat dinner?” Tara asked, shaking her head. “I would not have given you an entire tart had I known you were such a lush.” The smile never seemed to leave her lips. “Thank heavens you are with me here and not over at Mad Batter’s place. He would have you tied up in his underground BDSM club and spanked for such naughty behavior.”
“The Mad Batter?” Alice asked, trying to make sense of what Tara was telling her. Could she trust this woman? She had given her something that made her feel...unlike herself. Had she been drugged? The fear and confusion dissipated as she seemed to wake up further, giggling with happiness as her body relaxed and allowed her to let go.


Allison West has been inventing worlds and writing stories for years. Her favorite novels are those that leave a lasting impression, long after the final page is read. You can find more about Allison on Facebook and Twitter.


A Taste of Wonderland