I'm excited to have PK Corey as my Tuesday guest and enjoyed this glimpse into her newest release, CAL'S LAW. 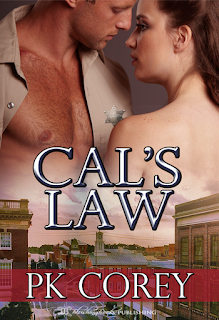 He was too old for her, and she was too much of a spoiled little rich girl for him.


Jenny is the typical rich-kid, sorority girl. Getting good grades isn’t high on her priority list. In fact, that sits well below getting into the secret faction of her sorority. To do that she must pull off a daring bit of mischief.


Cal Bennett is the town sheriff. He’s a relatively young, no-nonsense, kind of guy – with a heart of gold. He is the moral center of this small town in North Carolina. But when his and Jenny’s paths cross unexpectedly, things get complicated and he questions his morals and his heart.


His plan to save Jenny from herself by enforcing strict discipline seems like a sound one.  To both of them. At first. He enacts a touch of martial law and Jenny agrees to learn more than English Lit. Cooking, cleaning, and laundry are but a few of her new subjects. Along with time-management, telling the truth and doing homework. Breaking any one in this new set of rules will result in a sound spanking. It all sounds simple enough when she signs on the dotted line of the contract between her and her sheriff.


But, life is messy and she is faced with one tough decision after another. She’s a college student! Shouldn’t life be easier than this? Less complicated? But she is pulled in two directions: her moral, upstanding sheriff leads her down one path, and a cute frat boy leads her down another. In one direction lies maturity, and a future. In the other, the simplicity of being a rich kid in college where Mommy and Daddy pay for everything. Now she must choose: Will she continue to let her parents pay for it all, or will she learn to pay the price for her own actions?


Jenny stared into Cal’s eyes. He was the most beautiful man she’d ever seen and she realized all her fantasies were about to come true.


“Jen there’s no way you want this as much as I do.” Cal scooped her up and carried her to the bedroom. He sat her on her feet and she stood still and he pulled off her tee shirt.


Damn, Cal thought to himself, matching bra and thong, I’m back to my teenage fantasies. Turing her around he unhooked her bra and turned her back to him. He pulled the straps down her arms until her breasts were free. They were incredible and his mouth was drawn to them. He felt the nipple harden in his mouth as he sucked gently and her abdomen tensed as he reached for the other.


Cal lay her back onto the bed and slid her thong down her long legs, hungrily taking in the sights he’d been longing to see, to touch, to taste. Cupping her breast, he softly asked, “Jenny, are you a virgin?”


“A virgin? That’s what you’re worried about now?”


The love of writing came to me late in life and I spent time trying to fit writing into a busy schedule. Recently I retired, the kids are out and on their own and my wonderful husband encourages me to spend more time exploring the world of writing.


I always hear you should write what you want to read, so I have. I write loving domestic discipline with the stress on ‘loving’. I want a strong man who cherishes the woman he loves and will go to any length to keep her safe and protected.


My Cassie’s Space series shows a mature couple who are deeply in love. Despite loving Cassie’s free spirited ways Tom is determination to keep her safe, even if it takes a trip over his knee. My new series, Cal’s Law, is about a younger couple. Though they come from very different backgrounds, love and discipline draw them together.