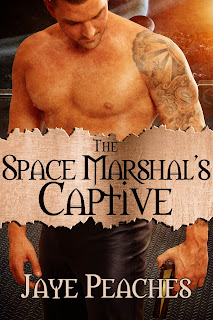 
After nineteen-year-old Jade Kryst is caught by space marshal Mason Hadley while trying to smuggle supplies to a rebel-held planet, she quickly discovers that her captor is not a man to be underestimated, and when she fails to cooperate with a thorough strip search she ends up with blushing cheeks and a sore bottom.


Though he does his best to remain professional, Mason is drawn to his beautiful, feisty captive, and he strikes a deal with her. If she will use her skills as a mechanic to keep his ship up and running while he hunts down the dangerous criminals he is pursuing, he will set her free once they are apprehended. Jade accepts his offer, but it doesn’t take long for Mason to realize that keeping her in line will require a firm hand frequently applied to her bare bottom, along with even more humiliating punishments when her continued disobedience makes it necessary.


Despite her status as his prisoner, Mason’s stern dominance leaves Jade burning with desire, and when she surrenders herself to his masterful lovemaking it is better than she ever dreamed. She soon finds herself falling deeply in love with the handsome space marshal, but will there be a place for her by his side after his mission is over?


Mason stopped outside the medical bay. “In there, now.” He jabbed his thumb at the door.


Inside, he paced the room with his hands on his hips while Jade wrung her hands together. “So,” she said jovially. “I fucked up—”


“Shut it,” he said curtly. “I know what you did. I don’t need an explanation of why. I guess you feel some kind of loyalty toward your smuggling friends, so you decided to try to escape. Laudable, I get it.” He halted right in front her, staring down his long nose. She spied a small cut on his temple, glued closed and cleaned. He made no reference to his injury.


“Yes, you can. You can give up endangering yourself, this ship, and me. You can give up thinking that you’re on a personal one-woman crusade to save a whole planet. You can start by thinking about consequences.” He spoke quietly, almost too quietly, and it made the hairs on the back of her neck stand on end. An angry man should shout and curse, shouldn’t he? This one didn’t. What he articulated was blunt and to the point. Towering over her, he had the strength to overpower her and show his dominance in an aggressive way. Clearly, it wasn’t his style. He expected obedience.


Trapped, but unbound, the best course of action would be to relinquish her body to him and accept her fate. Jade rocked back on her heels and couldn’t think of anything to say.


Jade instinctively clenched her buttocks at his sternness—such a voice he had when dishing out those words, it almost dazzled her. Her ass cheeks had stopped throbbing, the physical impact of the last spanking had faded. She guessed it wouldn’t be long before they were sore once again.


She cleared her throat. “I suppose you want me to strip.”


He nodded, unsmiling. “Yes. Then bend over the table.” 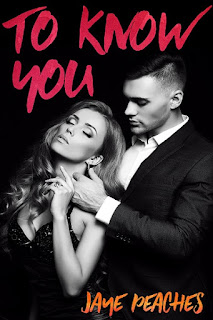 
Title: To Know You


What happens when a kink loving woman has to come to terms with a traumatic episode in her life? Can the broken submissive learn to trust again?


When Gemma Marshall resigns from a good job to work as a lowly intern in the heart of the City of London, immediately, the elusive company boss, Jason Lucas, seduces her.


Following a whirlwind of weekend trysts at his country mansion, Jason’s need to dominate her re-awakens her terrifying nightmares and leads to revelations from both of them.  What Jason seeks is an enduring relationship which means Gemma, if she wishes to win his heart and soul, has to return to the extraordinary life she’d left behind.


Can Gemma survive another relationship with an alluring master of the bedroom or will she finally turn her back on her natural desires?


(Previously published as Trust Me to Know You)


I rested my back on the bed as he took off my stockings. He slowly rolled them down while snaking his finger behind. I giggled at the ticklish sensation. Sliding back up my torso, he leaned over me, placed his hands on either side of my head and pinned me down, not with his weight, but the intensity of his blue eyes. A little end of day stubble was visible on his chin.


“I’m thirty-one years old, I’ve had plenty of girlfriends, lovers or whatever you want to call them,” Jason said. “I work hard. Play hard. Such a life doesn’t foster long term relationships, especially not conventional ones.” He traced his forefinger down my cheek, and the soft caress ignited me further.


What did all that mean? Was tonight just a one-night stand? I was too fired up to query his comment.


“Sure, Jason,” I hadn’t said his name before then, now I relished the syllables—Jason Lucas.


He started with his lips, tongue, and fingers. They moved everywhere. Kneading, nibbling, squeezing, licking and oh my, kissing my neck. I touched his head and raked my fingers through his hair, enjoying the freedom to explore. His hair might be blond at the ends, but the roots were dark, particularly where the strands lay thickest and across his crown.


“There is no bald patch, Gemma. If that’s what you’re looking for.”


I flinched and snatched my hands away.


He was grinning, reassuringly happy. “I’m not contagious you know,” he said pleasantly.


I returned to my own sensual exploration. The second time, his muscular shoulders and arms warranted my attention. He obviously worked out—his biceps bulged and his pectorals were gorgeously defined. Yet, he managed to stay lean and trim, especially his waistline. All this stunning physique, on show for me, had been hidden away behind his suits and shirts. What girl wouldn’t find him heart meltingly attractive and he was beneath my hands.


He snapped my bra cups down and teased my nipples with his teeth. I groaned as he sucked each one in turn—hard—before circling his tongue around the hard pebble. With no subtleness, he eased his hand down under the front of my knickers and beamed at his discovery. I sucked in a lungful of air as he poked his fingertip inside me.


“You are one wet girl,” Jason laughed and with his nose following the contours of my body, he started to glide towards my juice soaked pussy, ready to investigate.


I giggled and attempted to shrug my shoulders. “Can’t think why!” I felt pumped with adrenaline.


Kneeling on the floor, without blinking, nor loss of fluidity of movement, he dragged my knickers off, and flicked them over his shoulder. I shrieked as he buried his head between my legs and fluttered his tongue at my swollen clitoris, lashing my exposed clitoris with his precise tongue. I wriggled and writhed, unable to hold still. He cupped my arse cheek and squeezed it, sending ripples of excitement across my butterfly filled belly. With a gasp, I let my surrender deepened.


When not writing, I’m busy spending time with her family, enjoying music, sometimes drawing and if the weather allows, gardening.


So first, of course, the obvious question. How did you become a writer?


By accident more than design. I’ve always enjoyed writing since a young child. I filled exercise books with stories and diaries, so when my previous job ended six years ago, I had more time to take my hobby further. By then, I’d already penned a few spanking stories, and had ideas for more. My secret life as a kinky writer as Jaye Peaches wasn’t realised until I’d drafted nine books. To Know You was the first of these and this new version has been especially re-edited to celebrate my third year as an author.


Tell me about your latest release.


I wanted to combine the escapism of wealth – the playground for writing fantasies without boundaries – with the real-life world of domination and submission. The heroine, Gemma, isn’t a novice submissive with little experience, nor is she interested in romance. I didn’t want to write about the awakenings of virgin submissive who stumbles upon kink through a romantic relationship, instead I wanted to drop the reader straight into her life as a kink-loving individual who is independent and determined. The premise of the story is that she had a terrible experience and can’t believe she will ever be another dominant’s submissive. Jason, the aloof businessman, is at heart a caring man who initially wants to re-kindle what she has lost, only to find he needs more than her submission. The book isn’t simply about a submissive’s journey, but a dominant’s too. He has to adapt his dominance to meet her needs.


What was the hardest part of writing your book?


Letting go of the characters. In the end, I didn’t. I wrote an ending, a conclusion to the story that leaves the reader satisfied, then continued to write more about the couple. I enjoyed watching - or should that be imagining - how they developed and ensuring I remained true to their story.


Some have interests I share – Gemma is an artist, and I love to draw. In another book, Perfect Notes, I describe the relationship between to musicians. I’m also a musician. As for the kink? I prefer to keep my private life, private.


How many books have you written? Are they all spanking fiction?


When did you first consider yourself a writer?


I never know if I should tell people I’m a writer or an author. To me, anyone can be a writer, if they take pleasure in using words and communicating ideas or fantasies.  As a published author, probably this year was the first I consider myself a professional writer. I finally bought a web domain and had to register myself as a tax payer!  That makes it feel more real.


What are your current projects?


I’ve a paranormal Highland spanking romance that is in its final stages. I’ve taken two minor characters from a previous book and developed their own story. I’ve recently started work on another Sci-Fi spanking book and have contemporary paranormal story that is lurking in the background. I also have entirely vanilla projects constantly on the go.


You were just given a yacht. What would you name it?


It would have to be Sublime, because it’s the name of the luxury yacht in one of my books – Sublime Trust.