Tuesday's guest:  Allison West has stopped by with an excerpt from her newest title, LITTLE LIZZIE'S REFORM.  Thanks so much for sharing Allison! 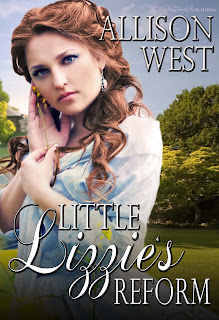 
Thomas Montgomery seeks out troubled ladies that are in need of a strict and proper upbringing, encouraging them to join Alton Reform. Discovering Elizabeth Grey alone by the tavern at night, he insists he accompany her on the journey home, to ensure she makes her return safely. It is her sharp tongue and fiery defiance that makes him desire her as his little Lizzie.


Without reservation, he suggests to her father that Elizabeth be sent away to Alton Reform, a school known for its strict disciplinary measures to create fine young ladies capable of obeying their husbands. Ladies that without such correction would wind up in an asylum for their tenacious and troublesome ways.


Unwed and with no prospects of marriage, Elizabeth is forced by her father to attend Alton Reform and be trained by her governess under the headmaster’s guidance.


Elizabeth does not take well to Alton Reform’s ways of discipline. Unpleased after a stern spanking to her bare bottom, Elizabeth runs away, only to be caught by Mr. Thomas Montgomery.


Will he force her to return to Alton Reform? Can Thomas show Elizabeth that love can be gained from discipline? How will she feel when he confesses his desire to make her his little Lizzie?


Buttoning her coat, she pulled it tighter as she headed for the door on her way out of the tavern.


“Please do not tell me you came alone,” a gentleman with thick brown hair said as he held open the door for her. He towered above Elizabeth, gazing down at her with a stern gaze.


“My friend left early,” Elizabeth said; it was a lie. Had Isabel shown up, she would have had someone to accompany her at least half way home on foot. The walk was not bad, she had learned ways to cut through town and make the journey quicker.


“Right,” he said, staring at her, sizing her up. He did not so much as blink as he refused to look away.


He had the palest blue eyes that she had ever seen, with thick dark lashes that matched his mahogany hair. He was striking, no doubt, but Elizabeth had done well to avoid men and did not wish to change her ways now. She hadn’t paid anyone much attention in the tavern, but the way he answered, she half-wondered if he’d been watching her.


He shook his head, clearly unpleased. “It is not right for a lady such as yourself to be walking alone at night. I shall accompany you home. Unless you have a carriage waiting for you?” He glanced outside, waiting to see if her coachman would show himself and take responsibility for the girl being on her own. No one came forward.


“Sir, I do not know you,” Elizabeth said, glancing at him from head to toe. He was well dressed, a striking gentleman a few years older than her. “It would be improper for you, a stranger, to walk me to my door.” He appeared pleasant and kind but that did not mean the moment they stepped away from the tavern that he would not turn on her and insist to steal her virtue in the darkened streets. Perhaps she was foolish for being so cautious but she could not help the feeling that she found unsettling as he offered to escort her home. Besides, should he escort her to the door, her father would have had a fit to discover she had snuck out.


“Then perhaps my coachman and I will accompany you to your home. Surely your husband or father would be grateful to know that you have returned safely.”


He didn’t seem to back down, no matter how hard she pushed that she did not require an escort to accompany her home.

Allison West has been inventing worlds and writing stories for years. Her favorite novels are those that leave a lasting impression, long after the final page is read. You can find more about Allison on Facebook and Twitter.