Welcome back to Saturday Spankings!  I'm pleased to be sharing a few lines from my new release and last book in the Virginia Bluebloods series, BLACKMAILED.  Wes finally gets his HEA and you'll get to catch up with the other couples as well. 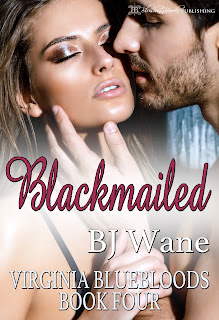 Charlotte Heffington can no more ignore Wes Montgomery's coercion into a short affair than she could forget the erotic experiences he gave her their one night together.  After several exciting, pleasure-filled trysts, she starts questioning whether she would be able to walk away unscathed and accept the future her cousin has mapped out for her or be left to crave the pleasures only Wes could give her.  When Wes turns on her, she’s finally had enough of others manipulating her life and vows to take control of her future.
Wes swore off relationships after a betrayal left him bitter towards women, but he reluctantly finds himself drawn to a woman who looked completely out of her comfort zone when she walked into a downtown bar one Friday night.  After caving to her inexperienced come-on and his uncharacteristic response, he spends an unforgettable night with her.  A week later, a chance meeting reveals her true identity and he feels taken in all over again.  In a rash move, he blackmails her into an affair that turns the tables on him when he finds himself feeling things for her he’s never felt for another woman.  Hearing she’s engaged shatters his belief in happily ever after again and his angry tirade when he confronts her separates them on a bitter note.
After learning the truth, Wes tries to make amends, but when that fails, he resorts to drastic, pleasurable means to convince her to give him another chance, but will it be enough?
Blackmailed is the fourth book in the Virginia Blueblood series and while it can easily be read and enjoyed as a stand-alone, don’t miss the other titles in this incredible series: Blindsided, book one, Bind Me To You, book two and Surrender To Me, book three.
DISCLAIMER: This book contains the spanking of adult women, explicit sexual scenes including BSDM. If any of these offend you, please do not purchase this book.

“I’ll tell you where and when to meet me,” he whispered in her ear right before sinking his teeth onto the small, soft lobe.  “And,” he continued as he slipped one finger past her damp seam into the even wetter recess of her pussy, “I’ll expect you to do whatever I command.  But don’t worry, baby, I’ll make sure you enjoy yourself.”  He stroked her clit, satisfied when she jumped and shook with that small contact.  “And if you don’t obey me,” he took a step back, left his finger inside her and swatted her right cheek, “I’ll have all kinds of ways to punish you.”  He slapped her again, leaving a bright red imprint on both white buttocks.  “But if you’re good,” he stroked her clit again just as he smacked her ass, “I’ll give you both pleasure and pain.  You remember how the two set you off before?”

Thanks for joining me today-don't forget to check out these other hot snippets!