It's SATURDAY SPANKS and what better way to participate than with a snippet from a new release.
The Virginia Bluebloods Series continues with Fin's story in book three, SURRENDER TO ME.  Out today and offered at a low, introductory price of $2.99-just for the weekend! 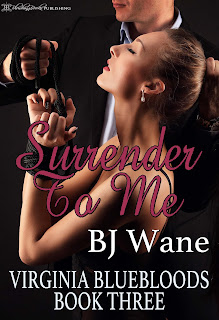 For six months, Shea Murphy has been moving from city to city, attempting to distance herself from her failure as both a sub and wife following her husband’s suicide. With the loss of her master’s strict discipline to keep her obsessive compulsive disorder under control, she’s finally driven to seek relief with another Dom. After two sessions with Master Fin, her urge to flee Richmond subsides and she takes a temporary job at a restaurant.

Fin O’Dell returns after a week out of town to find the sub he couldn’t forget was now his newest employee. Catching her stressing in his kitchen after closing, his quick response of another blistering spanking gives her the relief she needs. As Shea succumbs to Fin as a Master a little more each day, she struggles with her perceived guilt over her husband’s suicide, refusing to believe Fin’s insistence Gerard was not the man, or the Dom she thought he was. When the truth comes out, has Shea waited too long to trust her new Master?
In the scene below, Shea has succumbed to her long denied need for pain to divert her from the stress of her OCD and returned to The Warehouse to take Master Fin up on his offer to see to those needs.

She was here for the edge pain could give her from her stress; that was all.  She didn’t want or deserve the pleasure she knew could be had from the pain.
“I..thank you for having me back, Master Fin,” she finally said.
“I’m going to give you what you need tonight, Shea, but that may not be what you think you want.”  Leading her into the short hallway between the social room and the playroom, Fin added, “But nothing short of the word no will stop me.  Understand?”
A little apprehensive but determined, Shea nodded, replying, “I’ll store my things and be right out.”
“Shea.”
She had turned toward the restroom when his soft voice with its steely undertone halted her.  He waited until she looked back at him before stating, “Don’t keep me waiting.”

I hope you enjoyed that teaser.  Don't forget to check out the other hot snippets offered today on Saturday Spanks!