I'm pleased to welcome Amelia Smarts today - #1 Amazon author in Historical Erotica and Western Erotica!  She's sharing a scene from her new release, CLAIMED BY THE MOUNTAIN MAN.  You won't want to miss this hot title or a chance to check out her other bestselling books. 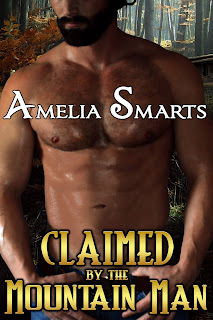 About Claimed by the Mountain Man


Times are hard in Montana in the mid-1800s, and when Nettie finds herself impoverished, desperate, and alone after the death of her husband, she flees the town of Helena to escape the clutches of the local saloon owner. But living off the land quickly proves much more difficult than she’d hoped, and after days without food she resorts to stealing from Jack Abrams, a gruff mountain man and trapper who lives a secluded, uncomplicated life in the woods.


Jack doesn’t take kindly to being stolen from and when he catches her red-handed, Nettie ends up lying naked over his knee for a long, hard spanking. To her surprise, however, after her punishment Jack offers her food and shelter in return for cooking, cleaning, and doing as she is told. But Nettie is determined to never rely on a man again, and with a belly full of food and renewed determination, she abandons him to take another shot at living in the woods on her own.


Jack knows the headstrong girl won’t survive without his help, especially when she chooses a grizzly’s winter cave as her shelter, and he can’t stand by and idly watch her demise. When his irritation with her foolish pride boils over, he decides it is time to show her how thoroughly a man can dominate a woman silly enough to venture into the woods alone. Jack’s stern chastisement and bold mastery of her body leave Nettie begging for more, but is she truly ready to give up her freedom to be claimed by the mountain man?


He heard the sounds of stirring. When he glanced over at the bed, he saw that the woman was sitting up, holding the blanket tight to her chest and staring at him with wide eyes.


“Go sit at the table for some breakfast,” he ordered. “We need to talk about what in the tarnation you’re doing out here in the middle of the woods.”


Jack wasn’t going to put up with any more disagreeable behavior from his uninvited guest. “Get moving, woman, before I drag you to the table myself.”


Of course. How could he forget? It had been impossible to get her nakedness out of his mind while he was lying in bed waiting for sleep. Jack walked to where her clothes hung by the fire and confirmed what he already suspected. Her trousers and shirt weren’t yet dry. “You’ll have to wear a shirt of mine until your clothes dry.” He walked to the dresser he’d built a year ago out of a felled Ponderosa pine and opened one of the two drawers. He chose a flannel shirt and held it out to her.


She took it and continued to stare at him with wide eyes. “You spanked me really hard. It hurt like the dickens.”


He raised a brow slowly. “That’s kind of the point. Did you think you were over my knee for a good time?”


She shook her head. “No, and I will admit I deserved it. But… are you going to do it again?” Worry flashed in her eyes.


Her words softened him a bit. He could see she didn’t want to do anything to earn another punishment, and that would make their acquaintance a lot more bearable for him. “Not if you behave yourself and do as you’re told.”


She nodded her agreement. He turned his attention back to the frying pan. He only owned one plate, so he spilled her portion onto it and set it on the table, which only had one stool by it. “Sit there,” he said, pointing at the stool. She scurried over to obey, buttoning the last button of the shirt as she did. Her immediate obedience pleased him. He noticed that she winced upon sitting, and that pleased him too. She would think twice before stealing in the future.


Buy Claimed by the Mountain Man


His Little Red Lily – Innocent farm girl asks repeatedly to be hired as an entertainer, but the saloon owner has different ideas about where a stubborn, disobedient little girl belongs. http://amzn.to/1TouqoF


Fetching Charlotte Rose – A proud young woman learns lessons in love and safety when a no-nonsense man sweeps her off of her feet… and over his lap. http://amzn.to/1U3FCJJ 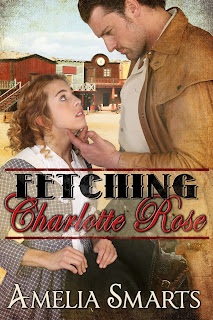 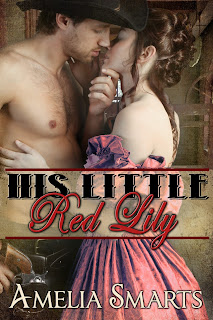 Thanks for joining me today, Amelia, and for that tantalizing peak at your latest release.  I know I'm itching to read more!