I'm excited to share a snippet with you from my new release, Her Master At Last for Saturday Spanks.  This is my first book with Stormy Night Publications and I've enjoyed working with them. 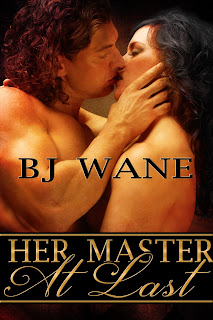 BLURB - Over the years since she first met Jack Sinclair, Morgan Tomlinson has developed quite a crush on him. As a girl she swore she would marry him one day, and as a twenty-seven-year-old woman with her life seemingly spiraling out of control she rushes to him for comfort. When she ends up stranded at his mountain retreat during a snowstorm, Morgan knows this may be the best shot she will ever have to make Jack see that she is not a little girl anymore.

Though he is well aware that Morgan has grown up to be a beautiful woman, Jack is a demanding man with particular tastes which he fears would be too much for her. She proves determined to test him, however, and when she disobeys him one too many times Jack decides it is time to take Morgan in hand.

By the time she realizes she has pushed Jack too far, it is already too late, and before she knows it Morgan has been pulled over his knee for a painful, embarrassing, and very public bare-bottom spanking. Though the humiliating punishment shocks her, it also excites her in a way she has never felt before, and despite her blushing cheeks and sore bottom Morgan cannot help longing for Jack to master her completely.

Impressed by her response to his stern chastisement, Jack sets out to teach Morgan what it would mean to truly belong to him, and with each passing day she surrenders her body more fully to his practiced dominance. But when her wealthy, snobbish family seeks to destroy her blossoming romance, will Morgan run away from Jack as she has run away from so many things before in her life, and if she does, will he chase after her and fight to keep her?

My eight sentence snippet begins when Jack catches Morgan spying on him in his clubroom after he just told her she had to remain upstairs.

Sitting down, Jack held her hands in a tight grip, glaring up at her.  “I warned you, Princess.  I told you the time would come when you would have to face the consequences of your actions.”
With a jerk, Morgan found herself face down over Jack’s hard thighs. Dressed in just his shirt, she wasn’t even allowed that small amount of modesty.  Cool air hit her buttocks as he flipped the shirt up, exposing her to the entire room of strangers.  Mortified, she screamed and struggled against him to no avail.  “Let me up, Jack!  I promise I’ll stay upstairs, just let me go.”

Be sure to keep hopping and check out the rest of today's snippets!