I'm thrilled to have MORGANNA WILLIAMS as my first guest today.  She's sharing a hot excerpt from her new release, His Rebellious Mate.  Grab a fan and enjoy! 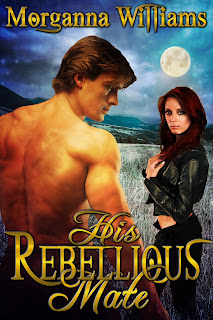 Thank you so much for hosting me BJ!

Nineteen-year-old Maggie Treenan, the youngest daughter of a human mother and a Ramelian commander, is certain that her brothers’ best friend, Jackson Marks, is destined to be her mate. Unfortunately for Maggie, however, Jackson sees her as nothing more than a sweet but silly girl, and when she throws herself at him to convince him otherwise she only manages to earn herself a stern scolding and a painful, embarrassing bare-bottom spanking.

To make matters worse, his chastisement triggers her mating fever just before he leaves Earth to return to his post with the Ramelian Guard. Heartbroken and overwhelmed by her unmet need for the man her body knows full well is her mate, Maggie spends the next eight years running a biker bar, riding motorcycles, and doing her best to forget about Jackson.

When he returns to Earth at last, it doesn’t take long for Jackson to figure out what has happened. Realizing how difficult it must have been for Maggie to live for all those years with the fierce, inescapable lusts of her mating heat—lusts that only he can quench—he sets out to claim her properly and make things right as soon as possible.

But Maggie has grown into a feisty, headstrong woman, and Jackson soon realizes that taming her is going to be no easy task. He will need to be loving, but he will also need to be firm, even when that means punishing her thoroughly for her stubbornness. Will his rebellious mate learn to submit, or will she find herself spending most of her time with blushing cheeks and a bottom that is sore both inside and out?

Then he moved, and she squealed when she found herself facedown over the bathroom counter, his hand began clapping off her rounded bottom.
“I think I need to remind you who wears the pants in the family,” Jackson said, smiling into her eyes in the mirror as his hand fell hard and fast.
Just when the stinging heat built to the point she couldn’t help a little whimper of response, he stopped and stroked his hand over the heated skin and then spread her wide.
“Jackson?” she asked worriedly.
“Don’t look now but your cock is about to take you hard,” Jackson said as he thrust into her forcefully, taking her to the hilt.
“Oohh…” Maggie moaned as her body stretched around his big cock, the pleasure pain almost too intense.
Jackson used his hands to part her ass cheeks, spreading them as wide as they would go and increasing the tightness of her body around his pistoning shaft. An orgasm swept through her, surprising her with its intensity and how quickly it overtook her senses.
Then he pulled out of her body, leaving her bereft. His hand began to fall swiftly over her backside again as her body continued to pulse in the aftermath of her climax. When the spanks began to fall just below her pulsing channel, over and over again, it sent her into another orgasm.
“That’s it, baby, give me everything you’ve got,” he whispered as he turned her and lifted her high in his arms.
Maggie instinctively wrapped her legs around his waist as he lowered her onto his waiting shaft, his hands cupping her sore stinging ass and working her up and down his cock.
She wrapped her arms around his neck and pressed her mouth desperately against his, needing an anchor in the storm of passion swirling through her body.
Jackson sucked her tongue into his mouth as he pressed her back against the wall and began hammering up into her in short hard thrusts, his pelvis grinding against her swollen clit with every thrust.
Maggie tore her mouth from his with a scream, as everything inside her wound impossibly tighter to an almost painful level. “I can’t!” she cried.
“You can and you will. Come for me, Magpie!” he commanded.
Lights flashed behind her eyes as her body seemed to implode around him, every muscle in her shaking with the intensity of the orgasm. Her body jerked hard and her sheath tightened around his cock, squeezing it in a spasm of intense pleasure that pulled him into the vortex with her.

WHEW!  If you want more, grab your copy here: