Today I'm celebrating the 5 star, Top Pick review for BLINDSIDED on The Romance Reviews!  Check out the tantalizing snippet below of Nate and Eve's first encounter. 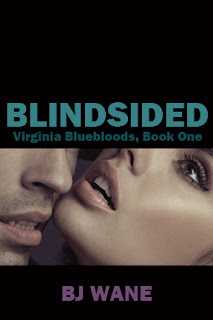 
Eve Sawyer had a bright future ahead of her when a tragic accident costs her everything.  Now, twelve years later, desperation for all she has been missing compels her to seek comfort and pleasure in the arms of strangers.  A few hours indulging in anonymous sex with a man named Nate gave her more pleasure than she ever dreamed possible; unfortunately past experiences with men hadn’t given her any hope that night could ever lead to anything more.  After meeting Nate again and succumbing to his erotic coercion to enter into a sex-only affair, she soon discovers all the different ways a man with a creative imagination can give a woman with limitations the exciting, pleasurable adventures she has been craving.


Nate Radcliff never had trouble forgetting a woman once he left her bed until he spent the night having sex with a woman who insisted on keeping her name a secret and her face hidden in the dark.  A few weeks later, a chance encounter has him coming face to face with the woman he has been obsessing about, and with the fact that she is blind.  Immediately struck with both lust and admiration for the lengths Eve is willing to go to to brighten her dark world, he becomes determined to give her the adventures and sex she craves.


For weeks Eve basks in the decadent pleasures and adventures both Nate and his friends give her, making sure she keeps her heart guarded from hoping for more, even when Nate insists their sex-only affair has grown into something more for him.  But Nate wasn’t one to give up, especially when he wanted someone as much as he wanted Eve.  Just when his persistence starts to pay off and Eve becomes open to a future with him, her best friend, Holly, returns to town, her jealousy and possessiveness threatening to drive them apart.  Eve refuses to believe anything bad about Holly, the only person who has stayed faithfully by her side through thick and thin, which drives a wedge between her and Nate.  In the end, Eve’s refusal to see her friend’s true motives comes close to not only costing her the man she loves, but to costing her life.
EXCERPT

Giving the door a light rap, he gritted his teeth when it shifted open. What kind of trusting idiot lied naked in bed with the door ajar, waiting for a stranger to fuck her?  “Camille sent me,” he called out, stepping in and closing the door with a tight click behind him, waiting for her reply before entering the suite.


Her soft, hesitant voice told Nate she was as unsure as she should be over meeting a stranger like this.  He reminded himself she had her reasons for being here and for her stipulations, just like he did, and they were no more his business than his were hers.  The small sliver of light seeping under the bathroom door was bright enough to help him make out the shape and location of the king size bed and the small form lying in it.


Hands going to his shirt, he unbuttoned it as he walked across the room saying, “I’m Nate, sugar.”


“Thank you, Nate, for agreeing to my terms for tonight.”


Nate followed the sound of that soft voice as he slid naked into the bed and reached for her.  “Don’t I even get your first name?” he asked her, drawing the small, nude body next to him.  Her startled gasp went straight to his cock, hardening his semi-erection into a full blown hard-on.  Or maybe it was coming into full frontal, naked contact with her soft, petite body that had him up and ready to go with the speed of a teenage virgin.


“Oh, my God,” Eve breathed when she felt herself surrounded by over six feet of hard male flesh.  For the last five years, she has let Camille set her up here for a night of sex with a complete stranger, but the four men who came before Nate weren’t nearly as hard, or as big, as this man was.  It was a strange but heady feeling to be enveloped and held close against such a rock-solid, huge body.  “You’re so….big,” she whispered with an audible gulp when she felt his erection poking her stomach.  His chuckle was as deep and dark as his voice and the room.


“And you’re so small.”  His reason for being here reared to the surface when Nate recalled how petite Leah was.  The urge to sink into this woman’s willing body and loose himself in mindless pleasure had him shifting over her, spreading her legs with his leg and running his hand down her torso to cup a small, incredibly soft breast.  “And very soft,” he murmured before dipping his head and finding her nipple.

http://erotic.theromancereviews.com/viewbooksreview.php?bookid=19135
Posted by BJ Wane at 9:19 AM