For all future updates and blogposts, please visit my new website.

For this week's post on SATURDAY SPANKINGS I'm sharing a tidbit from Submitting to the Cattleman, book 6 of Cowboy Doms.

A taunting smile curled his mouth as he shut the door and stepped toward her. “What’s wrong? You weren’t nervous with me at the club, and since I wasn’t inebriated the last time I was here with you, I remember clearly how you begged for my attention.” Gripping her arm, he tugged her over to the sofa, sat down and pulled her over his lap.


As soon as Leslie’s nervously fluttering stomach landed on Master Kurt’s muscle-hard thighs and he held her down with a hand braced between her shoulder blades, everything inside her settled. Releasing her stalled breath on a whoosh, she braced her hands on the floor as he inched her skirt up over her panty-covered butt. Feeling the need to say something, she looked around with a teasing smile of her own. “Anything I can say or do to change your mind?”


“There’s always the safeword, other than that,” he shoved her panties down, “no.”


“Okay.” She put her head back down, thrilling to the cool exposure of her buttocks and the warm caress of his calloused palm despite the vulnerable unease this position always conjured up.


“No pleas or extra apologies?” He squeezed one globe, the tight grip drawing a shudder.


“I learned long ago never to try and dissuade a Master intent on punishment. And I know when I’m in the wrong,” she admitted in a muffled reply, goosebumps racing across her backside as he released his hold on her flesh.


“You intrigue me, sweetheart.” Kurt swatted her right cheek, hard enough to warm her skin and sting. “You don’t hesitate to admit when you’re guilty of wrongdoing and don’t balk at accepting your punishment.” Another smack generated more heat and a deeper pain that snagged her breath. “But anything personal sends you running.” Two rapid slaps bounced her cheeks, the ache and burn seeping deeper into Leslie’s flesh. “Do you go to the club just to appease your submissive needs?”


Four blistering blows threatened her composure, forced her to tighten her arms to keep from sliding forward and bite her lips to prevent a sob from the throbbing pain encompassing her entire butt. Master Kurt allowed her time to adjust to the discomfort and to answer his question, softly rubbing the abused flesh. Taking a deep breath, she let the pain work in her favor, waited for it to spread down between her legs and warm her pussy. He helped it along by brushing his thumb along her seam, the light stroke enough to draw a damp response.


“Sir?” She shook her hair out of her eyes as she peered up at him and saw his focus on her bare butt and his teasing thumb.


“Answer my question, Leslie,” he ordered without looking at her.


“Yes,” She huffed, annoyed with his persistence, but not surprised.


“Thank you.” Lifting his hand, he added pressure between her shoulders as he braced one leg over her calves and proceeded to spank her in earnest.

Want more of these hot cowboys? Check out the entire series today! 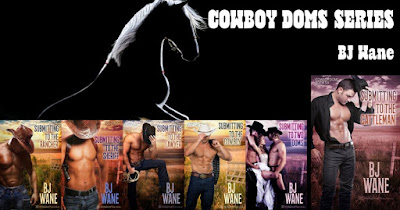