It's a new year, a new week to indulge in more Saturday spankings and time to celebrate a new release!  SUBMITTING TO THE RANCHER launches my new series, Cowboy Doms, and at a low introductory price of $.99, how can you resist? 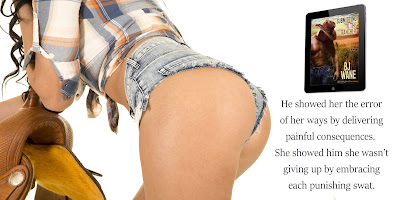 BLURB:
Sydney Greenbriar finds more than she bargained for when she gets lost on her way to report for a new job and finds herself at a BDSM club. Peering in through the window, her attention, and libido are both snagged by one man delivering some old-fashioned discipline to a young blonde. After he runs her off, both are surprised to discover she is the new cook he’d hired for his ranch.
Caden MacGregor wanted to turn away the cheeky woman he’d caught spying on his club without remorse, but desperation for a cook forced his hand. Sydney proved to be a definite asset to his employees, and a royal pain in his butt. Somehow, her penchant for getting lost and landing in trouble, along with her determination to return to the club as a guest, soon slid past his resistance.
It took a threat to Sydney and unearthing the truth about what made her flee her home in Missouri to force them to admit their feelings and get her to stay as more than his cook.
Publisher’s Note: This contemporary western romance is intended for adults only and contains themes of mystery, suspense, power exchange, ménage and adult themes. If any of these offend you, please do not purchase.
My spanking snippet:

The cheeky grin Sydney flipped Caden shouldn’t have surprised him, or her easy compliance when she turned her head back down and waited for his retribution. Had she kicked and screamed for him to let her go, he would’ve done so, but when had the girl reacted as he thought she should? Knowing it was a mistake and may very well end up crossing a line he couldn’t cross back over, he swatted her right buttock, the red imprint he left behind showing with vivid brightness against her lily-white skin. The terror that sent him speeding down to the corral wouldn’t abate, his mind still reeling from all the injuries she could’ve sustained with that foolhardy stunt. He spanked her other cheek and enjoyed the bounce of the soft globe and her shifting hips way too much. “Had enough?” he asked, rubbing his hand over the warm, smooth flesh.
“Would you stop if we were at The Barn and I was your sub?” she returned with a slight catch in her voice.
“Hell, no.” He refused to lie even if doing so would be in his best interest.
“Then pretend I am and don’t stop… please.”
He sighed, her whispered plea sealing both their fate. “Remember, I warned you to be careful about what you ask for.” Caden proceeded to give her what she thought she wanted ever since he’d caught her spying and caved to what he’d been itching to do.
With a volley of sharp smacks, he peppered Sydney’s ass until the pink tinge turned a deep red, her warm skin grew hot and her quiet mewls erupted into louder cries. She shifted with a moan when he stopped to rub the abused mounds. After soothing the sting, he gave her time to adjust to the soreness by palming the plump curve of one crimson cheek.  She had a perfect shaped ass with soft, malleable buttocks that had clenched with each spank then softened as she adjusted to the pain. Then she shifted again, lifting into his hand, and he barely heard another whispered entreaty of ‘please’ that drew his eyes to her glistening seam. “You continue to surprise me, darlin’.”
Sydney whipped her face around, shaking her hair out of her drenched eyes. “Does that mean…”
Caden squeezed her buttock and drew a yelp from her by delivering a final, blistering swat. “You’re new to this and don’t realize how sore you’ll be. Sit up.” Her face mirrored the color of her ass, but it was the blatant need reflected in her dilated eyes that tempted him to change the tone of this lesson and reward her, and that would not do. His actions were meant as a deterrent, not a pleasurable interlude. “Next time you disobey a rule, you’ll get a taste of my belt.” Ignoring the desire to sink his fingers between those enticing, plump, damp folds, he stood her up and pulled up her panties and jeans. Standing, he lowered his Stetson and headed to the door, saying without looking back, “I have work to do.”
Enjoy the rest of this week's bloghop!