And don't forget to visit my guest page to read excerpts from Ashe Barker and Libby Campbell's new releases! 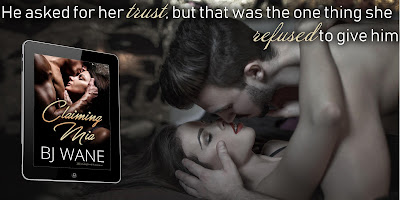 BLURB
Newly divorced Mia Reynolds doesn’t like Chief Nolan MacGregor. His
arrogance gets under her skin, but it’s her body’s instant reaction every
time he levels that cobalt gaze upon her or hints at giving her what he
keeps insisting she wants that really gets to her. After her husband’s
betrayal, she’s sworn off getting involved with anyone, and certainly isn’t
going to trust her fragile heart with the town’s reformed bad boy.

Nolan wants Mia and refuses to let her prickly stubbornness stand in his
way. Once he entices her into an affair and shows her the benefits of
submitting to him, her off-the-charts responses prove he was right all
along – she is the one for him. When his investigation into an illegal drug
ring implicates Mia’s business, he never stops believing in her innocence.
When the Feds go around him, Mia refuses to believe he hadn’t been with her just to keep an eye on her and her nursery for proof the drugs were coming in on the trucks carrying her landscaping orders.

SHORT SNIPPET:
Warm summer air wafted over her exposed buttocks for the first time in her life, shocking her when the sudden outdoor exposure elicited a thrill of excitement.  Before she could grasp the significance of that, he palmed her right cheek and squeezed, the instant pleasure from his touch taking her breath away.

“Just as I thought,” Nolan rasped, bending his head to nip her earlobe.  “Soft and malleable.  And so very…spankable.”  He drew back and slapped the same cheek, a light smack that tingled more than hurt.

Mia shut her eyes against the warm dampness filling her long-neglected pussy, mortified by her response to what should have been an abasing experience.  The next swat covered her other cheek and was just as potent as the first.  Her tense muscles relaxed, and she was thinking this wasn’t so bad when he delivered a harder smack that jiggled her flesh.  A small cry slid past her compressed lips, but he didn’t give her time to balk or complain as he set about peppering her butt with a volley of spanks, alternating between light and hard enough to sting while moving back and forth between her buttocks.  A slow warmth enveloped her entire backside, along with small prickles of pain as the slaps grew sharper.  Unable to help herself, she lowered her head to rest on her hands braced on the truck and tried to ward off the escalating pulses spreading down to her sheath.  A part of her couldn’t believe she was letting him do this and an even more insane part couldn’t fathom the escalating arousal the embarrassment and discomfort added to.