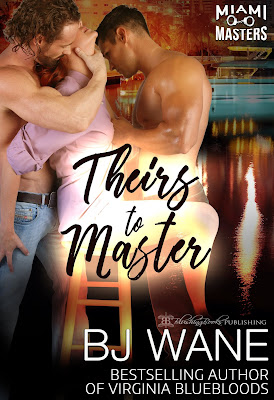 Their dual torment always left her vibrating for more…more, more.

BLURB:
Paige Wilcox has been lusting after the Carlson brothers since the first time she saw the two men enter the cops’ bar where she works.  Problem is, neither man shows her the slightest interest-not until her sister is attacked at a club and they discover Paige posing as a submissive to draw out the assailant.
Troy and Trevor Carlson always found the feisty redhead attractive, but steered clear of personal involvement since she showed no signs of being sexually submissive.  Fear for her safety and a determination to keep her out of their investigation into a serial attacker prods them to insist she complete the terms of an auction contract after they win the bid on her.  Neither Paige nor the brothers are prepared for the streak of submissiveness she exhibits under their dual control.
Paige doesn’t fight her growing need for the two men and the alternative sex they introduce her to, but when they give no hints the feeling is mutual, she despairs of anything coming of the short-term relationship.  It takes the reappearance of the man they were after and another threat to Paige to get all three on board with giving a committed, three-way relationship a try.
Publisher’s Note:  This steamy contemporary ménage romance contains elements of power exchange.  While it is book six of the Miami Masters series, it can be read and enjoyed as a standalone.

EXCERPT:
Only sheer stubbornness kept Paige from saying red when Trevor pulled her jeans down.  Her natural inclination to protest this indignity with ‘no way, no how’, fell to the wayside the minute her mons pressed against Troy’s muscled thigh and she looked up to see raw lust and rich approval etched on Trevor’s face.  Then Troy palmed her butt cheek, his calloused palm brushing against her bare skin setting off sparks of pleasure that commanded her attention.  She'd yearned for their attention for months, and now had it in spades.
Few of her lovers ever bothered with ass play, so she’d never imagined that part of her anatomy could be so erogenous.  But the more he explored her buttocks, squeezing then caressing, the hotter she became.  A curl of arousal took up residence between her legs, softening her pussy, dampening her slit until embarrassment forced her to tighten her thighs.
Closing her eyes, Paige tuned out the voices from the ongoing auction and shoved aside fretting over whether anyone else’s eyes were on her.  The tantalizing caresses eased her into relaxing then prodded her to wiggle her butt and loosen her thighs in a teasing hint to do more, to touch her where she ached.
“I think she’s ready.”
The amused inflection in Trevor’s voice snagged her attention one second before his words sank in.  Before she could register the full meaning of that comment, Troy halted the soothing, arousing strokes of his hand and delivered a sharp swat to rival the one Damien issued on the stage.
Her head reared up in startled astonishment at the abrupt switch from coaxing pleasure to blistering pain.  Before she could say anything, he swatted her again, adding an identical throbbing burn on her other cheek.
“Take a deep breath, Paige, and lie still.  It’ll be over before you know it.”
Shaking her hair out of her eyes, she glared up at Trevor as Troy peppered her buttocks with an array of slaps that robbed her of breath.  “Easy…ow!…for you to say,” she gasped, her mind consumed with the fiery heat spreading across her entire backside and the deep throbbing encompassing her abused skin and spreading to her pussy.
“You should’ve heeded our warnings, and remembered I mentioned consequences if you continued with your harebrained scheme to interfere in my investigation,” Troy admonished without slowing the rapid volley of spanks.
It was hard to think straight, to pay attention to what either man said, but she managed to stick up for herself with a quick rebuttal.  “I don’t take orders from anyone…holy shit!”  Crap but those last two hurt!  “Damn it, I’m not one of your little groupies, willing to let you walk all over me.”  Desperate to deny her body’s heated response and the pleasure inching its way past her resistance to this degradation, she tried to wriggle away from his descending hand, but Trevor reached out and clamped his hands over the top of her thighs.  Between Troy’s imprisoning hand braced between her shoulders and Trevor’s tight told, they left her no choice but to endure and accept her surprising reaction or say red and pay the hefty price tag of ending this now.