I've returned to SATURDAY SPANKINGS this week with my new release, THEIRS TO MASTER, book 6 in Miami Masters.  In this snippet, Paige has just been caught by brothers, Troy and Trevor posing as a submissive in their club's annual charity auction in order to draw the attention of the man who assaulted her sister.  They warned her to stay out of their investigation... 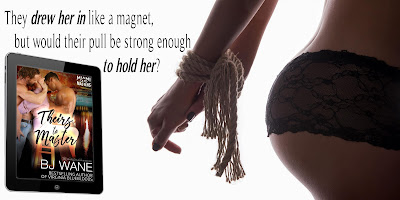 BLURB:
Paige Wilcox has been lusting after the Carlson brothers since the first time she saw the two men enter the cops’ bar where she works.  Problem is, neither man shows her the slightest interest-not until her sister is attacked at a club and they discover Paige posing as a submissive to draw out the assailant.
Troy and Trevor Carlson always found the feisty redhead attractive, but steered clear of personal involvement since she showed no signs of being sexually submissive.  Fear for her safety and a determination to keep her out of their investigation into a serial attacker prods them to insist she complete the terms of an auction contract after they win the bid on her.  Neither Paige nor the brothers are prepared for the streak of submissiveness she exhibits under their dual control.
Paige doesn’t fight her growing need for the two men and the alternative sex they introduce her to, but when they give no hints the feeling is mutual, she despairs of anything coming of the short-term relationship.  It takes the reappearance of the man they were after and another threat to Paige to get all three on board with giving a committed, three-way relationship a try.
Publisher’s Note:  This steamy contemporary ménage romance contains elements of power exchange.  While it is book six of the Miami Masters series, it can be read and enjoyed as a standalone.
AMAZON           BLUSHING BOOKS


The amused inflection in Trevor’s voice snagged her attention one second before his words sank in.  Before she could register the full meaning of that comment, Troy halted the soothing, arousing strokes of his hand and delivered a sharp swat to rival the one Damien issued on the stage.


Her head reared up in startled astonishment at the abrupt switch from coaxing pleasure to blistering pain.  Before she could say anything, he swatted her again, adding an identical throbbing burn on her other cheek.


“Take a deep breath, Paige, and lie still.  It’ll be over before you know it.”


Shaking her hair out of her eyes, she glared up at Trevor as Troy peppered her buttocks with an array of slaps that robbed her of breath.  “Easy…ow!…for you to say,” she gasped, her mind consumed with the fiery heat spreading across her entire backside and the deep throbbing encompassing her abused skin and spreading to her pussy.

Thank you for stopping by.  Be sure to enjoy the rest of this blog hop!