I hope you enjoy these excerpts from both books and take a moment to check out both titles-you won't be disappointed! 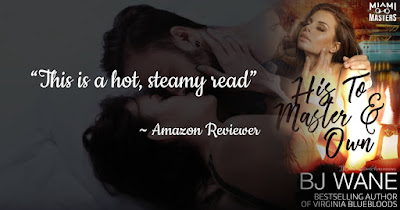 Blurb - His To Master and Own:
The first time Sean Bates saw Alessa Alexander at a BDSM club without one of her friends attending with her, he didn’t approach her or interfere, deeming it was none of his business.  The second time, his protective, dominate instincts forced him to confront her, and then offer his professional counseling for her needs.
Alessa’s desire to turn herself over to a man’s full control kept her from believing she’d ever enjoy a long-term relationship like her friends recently committed to.  When she gets up the nerve to ask Sean Bates to tutor her in her unorthodox fantasies, the first scene he devises leaves her aching for more of his strict control, but worried about keeping her feelings uninvolved.
Past heartbreaks kept Sean and Alessa leery of hoping for too much from their agreed upon temporary relationship.  Between escalating problems with an ex at work and her insecurities, Alessa runs from Sean before she ends up hurt.
But it doesn’t take her long to realize how much she wants him and his strict discipline, enough to risk the height of humiliation to earn his forgiveness.

Her response to his control was everything she hoped, and feared it would be.

Excerpt:
Sean couldn’t recall another woman who looked as beautiful when in the throes of an orgasm as Alessa.  Her red streaked hair dampened on the ends, her body bowed and jerked in the restraints, glistening with a moist sheen as she rode the dildos with unabashed pleasure.  “Again,” he commanded when her gyrations slowed, and she shook with the dwindling tremors of her release.
He worked the double phallus inside her, upped the vibrations by twisting the small knob on the base again, and pressed the larger one harder against her swollen, reddened clit with each return thrust.  The black corset emphasized the paleness of her skin, especially the fleshy mounds of her quivering breasts and her soft thighs above the gartered stockings.  As sexy as she looked, he couldn’t wait to strip her bare the next time, to enjoy access to her whole cushiony body.
“Oh, God, please,” she pled, her breathless voice zeroing straight down to his balls.  How long had it been since he’d reveled in hearing a woman beg?
“Please what?” he prodded with another plunge that brought her up higher on her knees.
“I don’t think…aaah!”  Sean cut off her denial with a painful bite of one nipple then smiled when she pressed her crotch down on the invading objects and came apart again.
“That’s it, Alessa.  Don’t think, just feel.  One more.”

The new Masters of the Castle boxset, WITNESS PROTECTION PROGRAM - 10 authors, 8 brand new stories, 1 really, really bad man.
Where will you be when the bomb goes off?
Blurb for CONTROLLING CARLIE: