HIS TO MASTER AND OWN now up for pre-order for only $2.99.  Price jumps to $4.99 on release day, July 13th, so get your copy soon.  In the meantime, enjoy this steamy excerpt from Sean and Alessa's story. 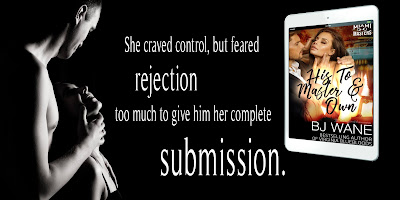 BLURB:
The first time Sean Bates saw Alessa Alexander at a BDSM club without one of her friends attending with her, he didn’t approach her or interfere, deeming it was none of his business.  The second time, his protective, dominate instincts forced him to confront her, and then offer his professional counseling for her needs.
Alessa’s desire to turn herself over to a man’s full control kept her from believing she’d ever enjoy a long-term relationship like her friends recently committed to.  When she gets up the nerve to ask Sean Bates to tutor her in her unorthodox fantasies, the first scene he devises leaves her aching for more of his strict control, but worried about keeping her feelings uninvolved.
Past heartbreaks kept Sean and Alessa leery of hoping for too much from their agreed upon temporary relationship.  Between escalating problems with an ex at work and her insecurities, Alessa runs from Sean before she ends up hurt.  But it doesn’t take her long to realize how much she wants him and his strict discipline, enough to risk the height of humiliation to earn his forgiveness.
EXCERPT:

He sat down but she resisted the tug on her hand with an uneasy glance toward the closed door.  “But, here?  What about your receptionist?”  Oh, God, she’d never be able to show her face to the older woman again if she heard what he planned to do.
“Barbara has left for lunch.  We’re alone in the suite.  But make no mistake, Alessa.  There will be times I’ll tell you to do something with others present and giving up control means you either comply or walk away.  Now,” he yanked harder on her hand and sent her sprawling across his lap, “quit stalling.  Unless you have a different preference, red will be your ‘stop’ safe word, and if you say it, our agreement ends.  Period.”
She didn’t have time to assimilate that remark, or the cold chill she experienced when she thought of walking away from him.  Being placed over his hard thighs like a recalcitrant child was hard enough to take in, but then he lifted her skirt and her automatic response was to throw her hands behind her, a futile attempt to preserve a modicum of dignity.  “Wait!” she cried in panic over him baring her big butt.
“No.”  Sean pushed her hands down.  “Grab my leg if you have to, but don’t bring your hands back here again or I’ll swat them as well.”
Why that sounded worse than having her bottom smacked, she didn’t know, but didn’t hesitate to grip his muscled calf and brace herself for this humiliation.  Her plain white bikini panties came down next and the cool air wafting over her exposed flesh drew a shiver down her bowed spine.  With her bare buttocks the only part of her anatomy on display, Alessa had never felt so vulnerable, but the slow caress of his hand over her quivering cheeks soothed her anxiety.  His casual, soft exploration worked to loosen her tense muscles even though she still held her breath, waiting for that first slap.