Includes Simon Say, Winning Sadie and Sadie Says I Do 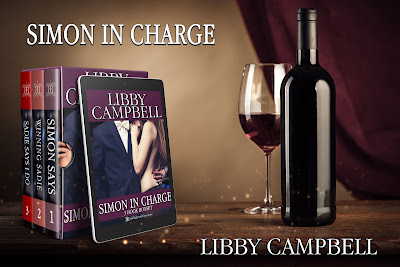 
When feisty Sadie Donohue meets billionaire Simon Jacobson at a New Year’s Eve party, she thinks it’s a chance encounter. Little does she know that Simon has arranged it all.


Widowed for six years, he is looking for another woman to share his life. She must be smart, sexy, and able to obey his inflexible rules. He has observed Sadie from a distance and decided she is just what he’s looking for.


Always one to challenge authority, Sadie tests Simon’s boundaries with her lively wit and recalcitrant behavior. He is amused but unmoved. Soon Sadie is regularly over Simon’s knee for being her sassy, strong-willed self. And she loves it!


When he proposes, she accepts without a second thought. The time arrives for her to leave her working-class world of public schools and sausages on the backyard barbecue to move into Simon's circle of wealth and privilege where children attend private schools and servants serve guests in lavish society homes. Sadie panics.


That’s it: engagement off!


Sadie's doubts, fired by a secret from her past, may be their undoing. Only Simon is in charge and he has other ideas. 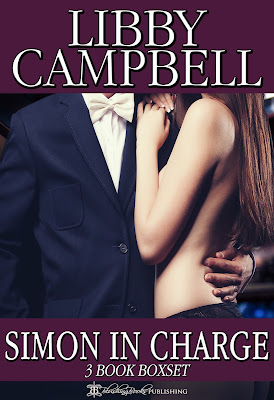 
In my apartment he took out his laptop and sat on the sofa. “Get ready for bed. When you’re done, we will talk about your foolishness today.”


I took as long as I possibly could, removing my makeup, flossing my teeth, and reorganizing the medicine cabinet. My nails needed attention but I decided that might be pushing it. I dabbed perfume on my wrists and slid the black negligee over my head. The gown had solved the riddle of being dressed but undressed; it covered me but left little to the imagination. I prayed it would distract him to the point of forgetfulness.


In the living room Simon was bent over his laptop. He didn’t look when I walked into the room. One of the straight-backed wooden chairs from my dining set had been placed across from the sofa from where he worked.


There were four chairs around my dining room table. Two were comfortable, padded parsons’ chairs. The others were wooden, ladder-back numbers. I only owned the wooden ones because I found them online cheap. There were good in an emergency like three friends for dinner at once but I always put a throw cushion on them for comfort. Simon hadn’t extended me that courtesy. The moment I lowered myself onto the rigid wooden seat, the cold crept through the gauzy fabric of my night dress. I waited for Simon to acknowledge me, say something—anything—but he didn’t. Because the heat had been turned down since Friday, the apartment was cool enough to safely store milk and chicken. The negligee lace grazed my nipples and I realized they were standing at attention. I wrapped my arms around myself, for warmth and modesty.


“Put your feet flat on the floor, your hands in your lap, and sit still. I’m almost finished.” His voice pinned me there, like a butterfly in a display case.


Almost is an ambiguous stretch of time, depending on how a person spends it. Sitting on that hard wooden chair with a tender bottom made the seconds stretch to hours. I watched Simon’s face and admired his concentration as he typed. That attempt to divert my attention soon grew boring. The seat on the roller coaster grew more uncomfortable. Eventually all my thoughts were about the terrifying descents ahead. I wished we could just push off from the station and get the scary part over with.


He stopped typing and reread what he’d written. Satisfied at last, he closed the clamshell and tucked it into his bag. I was sure that the time passed only seemed like minutes to him. My butt ached sitting on that chair but I didn’t shift even a fraction of an inch, not while he was staring at me. He crouched in front of me.


“First of all, I want you to know that I care about you very much. In fact I’m falling in love with you.” He kissed the back of my hands. “This—this ritual of discipline—is proof of that love. If I didn’t care about you, about making you and me together a stronger unit, I wouldn’t bother.”


He rubbed my hands with his thumbs. “Secondly, you owe a huge debt to my sister.”


I opened my mouth to speak, to ask why. He placed a finger on my lips. “It’s not the time for the condemned woman to plead her case.”


He caressed a nipple as he straightened to a standing position. “Tracy took strips off me before I went upstairs to wake you and bring you home. She said I had no business dropping a bombshell in your life and leaving you to deal with it alone. I told her you’re a big girl with lots of friends to protect you. Plus it wasn’t like I was offering you anything bad, was it?”


I shook my head and said nothing.


“Still I’m taking her comments into consideration as I determine your punishment. Tell me honestly—do you think you should be spanked tonight?”


“Wise choice to remain silent. Better not risk a wrong answer. However, in my court you are allowed to incriminate yourself. In fact, it’s expected when you have broken my rules. In time you will learn to thank me for the discipline. Until then, let’s deal with what you’re up for now. Let’s accept the fact that you’re going to be spanked. Can you think of the reasons why?”
Posted by BJ Wane at 5:41 PM