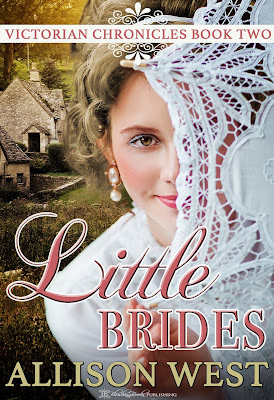 I'm pleased to have Allison visiting today and hope you enjoy a look at her new book, LITTLE BRIDES, as much as I did.
Little Brides
Victorian Chronicles Book Two
By Allison West
Publisher: Blushing Books

Eager young Clara is looking forward to her arranged marriage. She has been waiting all her life for the day when she will meet her husband. Her father has spent many months searching for the man worthy of his daughter’s hand.
Clara learns that her future husband, Francis, requires the young woman to undergo a medical examination to ensure that she has remained pure and that she is as intact as her reputation. Clara has never felt more disgraced as she is forced to bare all of herself to the doctor, where she undergoes far more than she ever anticipated. Silently, she swears to herself that she will move past the humiliation and never speak of what happened with the physician.
When Francis pays a visit to Clara’s father to propose additional terms to the marriage, wanting to bring along one of her maids so he will have a nanny in the house for Clara, the young bride-to-be is shocked to realize that he was the man giving her an examination. Was he really a doctor, or was he playing the part to ruin her reputation?
Little Brides is the second book in the Victorian Chronicles. It can be read as a stand-alone story but it does follow the first book in the series: A Proper Punishment.

A Proper Punishment
Victorian Chronicles Book One
By Allison West

She’s stolen gold… will she steal his heart? Lena Mae has been turning down the advances of men and potential suitors for marriage. She has not met a man worthy of her attention or her hand. Looking for adventure and learning of the route between England and Paris where gold is hauled and transported, Lena is determined to steal enough gold bars to live alone and never need to consider the advances of another man.
William Mason is responsible for guarding the train and the gold bars buried inside the safes. He has always been a man of the law. When he discovers that the safe transporting the gold has been broken in to and there are thieves on the train, he enlists the help of the young Lena Mae, who has caught his attention. Traveling alone with a story to tell, she appears to be the most honest person and the one least likely to be involved, given her dainty size.
His assumptions are wrong. Learning of her betrayal, he must decide how to enforce his rule and whether she should be disciplined – or arrested and handed over to the authorities for her crimes.
DISCLAIMER: This book contains elements of age-play, power exchange, discipline, anal play, and graphic sexual content. If any of these offend you, please do not purchase.
Available for $2.99 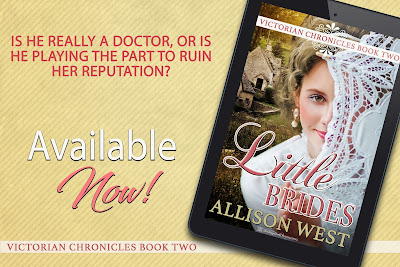 
Francis had paid an unexpected visit to Clara’s parents’ home, wishing to speak with them about hiring a nanny for Clara. Though, in truth, he did not desire to use such words around her family. He wanted the chance to marry the young lady and worried that if he confessed of his desires, that they might not offer the young lady to him. Instead he would refer to the position as a maid, because it was quite common for wealthy families to have maids to help the girls with their chores and getting ready for proper events.


He had not intended on visiting with Clara after the examination. In fact, he had planned on her discovering that he was the physician when they were to wed. It would have been quite a surprise, even for him, a man who despised surprises, but he thought it was in Clara’s best interest.


“What are you doing here?” Clara asked, staring at him harshly. She stepped closer, examining him from head to toe. “Are you really a physician or was what you did some sick joke?” Clara folded her arms across her chest.


He was confident that she was angry with him and for valid reason, he hadn’t been forthcoming in who he was. Francis also hadn’t thought that if he was honest she would have been accepting of what he wanted to do, ensure that she was a virtuous bride.


“I am a doctor,” Francis said. “You visited my home and the cottages for the sick and dying.” He quite often had at least one family hauled up in one of the buildings until they passed away. It made caring for them much easier when they were within a few days or weeks of their last dying breath.


“You lied to me!” Clara shouted as she stomped across the floor, coming to approach him.


He wasn’t sure whether she had it in her to hit him or only scream at him. Either way he was prepared for whatever anger she unleashed. Francis did not deny that it was probably warranted. It wasn’t that he intended to betray her, only keep her from second guessing the decision of their marriage.


“I did what was in your best interest,” Francis said. “I intended to marry you and have no reason not to.” He hoped that she would not give him a reason to turn her away. She was beautiful, strikingly so with her honey blonde hair and hazel eyes that twinkled in the candelabra lighting.


Clara huffed with anger, her teeth clenched tight and her hands balled into fists. “You violated me!”


“Excuse me?” George asked, interrupting the tiff between his daughter and Francis. “Would someone please clarify what exactly is going on here?”
Posted by BJ Wane at 4:58 PM