Multi-talented author, Megan Michaels is visiting with a look into her May 19th release, THE ALIEN'S MARK.  This sci-fi, dark erotica is part of the five book series, The Captive of Pra'kir, but is a stand alone read with guaranteed HEA.  If you enjoy a walk on the wild side, you'll definitely want to check out Megan's new title. 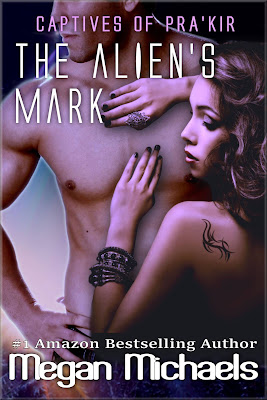 
Sometimes submission comes at the end of a leash....

Blythe Wainwright thought she had her life together. At twenty-eight, as an anthropologist studying other planets in the galaxy, she had become comfortable with the predictability of her life. However, that steady calm ended the day their ship crashed onto the shores of the coastal town of Endermere, on the Planet Pra'kir. Suddenly, her fate, and that of her four other shipmates, was in the hands--and at the mercy--of the Pra'kirians.

With no wife or children, Dr. Xan Breckett had been married to his career, climbing the ranks, becoming a respected member of the medical field. But he had aspirations for himself with no clear indication of how to attain them until the Council of Nine gave him one of the aliens that had crashed onto their shores from Terra. The red-haired beauty assigned to him might be the key to opening doors... doors he didn't know existed.

But until he attained his career goals he'd train his ward--and pet-- along with Ganza, the nurse, and his assistant, Billex. Blythe's biting had been a nuisance in detention, but Xan knew how to treat a human whose only form of communication seemed to be biting, like an animal. He'd cure her of the vile behavior (and others, as well) no matter what harsh methods it took.

Though she was a grown woman, Blythe found herself held captive as a ward and pet in a household reminiscent of Victorian Earth. Under the authority of a very large, stern Pra'kirian - and one who expected complete and abject obedience she feared she had little hope of mercy.

But if she obeyed her stern captor, could she find contentment - and perhaps even happiness?


She survived the crash…


They’ll make her wish she hadn’t


Xan’s dark eyes watched her intensely, like a lion with his prey. When she was close enough, he took the rod from her, pulling her naked body to stand toe-to-toe with him. “From now on, since biting is an issue for you, the shock to both your neck and anus will be phase one of your punishment. Phase two will be the oak paddle.” He nodded at the vile implement. “Phase three will be this rod—spanking your little pucker along with three lashes of the same rod over your paddled bottom.”


“I-I need to leave this house. I th-think I’ll need to contact the Magistrate and the Council of Nine to move me to another house. D-do I have an advocate, Sir?”


His large beautiful mouth curved into a full smile. “Advocate? Is that what you said?”


She nodded, his face blurring through her watery gaze.


He laughed a low quiet – almost sinister—chuckle. “My dear pet, you’ll find that you have no advocate. I’m the only voice you’ll have from now on. I’ll meet your needs and in turn, demand your obedience in all things. Your wants and desires are really of no consequence to me. You see, you’ve been given to me as a gift, and I understand that at this moment you may not see me as a gift, but some day, girl, hopefully sooner rather than later, you’ll come to see me in this light. But until then, you’ll receive no reprieve from my training regimen for you.”


His finger swiped at a tear on her cheek, and she watched him bring the watery evidence of her sadness to his lips. “Nothing is sweeter than the salty tears of a submissive. I’ll take delight in your misery, because it satisfies a longing in me.”


For the first time, her plight became crystal clear. This was her punishment for crashing into Endermere, and he was the gift she’d been given instead of death.


She pulled in a shaky breath, staring into the dark depths of her captor’s eyes, hoping to discover mercy or kindness there…and finding none.


Xan leaned forward his eyebrows furrowed, speaking in a low growl of warning. “You have no rights, prisoner. You crashed in our town, destroyed our beaches, killing people. It is our kindness as a planet that has placed you in my house; and it was my status as a respected doctor for our community that has placed you in this respectable household.”


He put his hand up to halt her, “No, you listen. Your wishes and desires are no longer of concern to me, the Magistrate, or the Council of Nine. You’ll be punished severely, used as a sex toy, and you’re here to meet my every need. You’ll learn that obedience is rewarded.” He stroked his cool long knuckles along the side of her face; and she forced herself to not cringe at his touch.


“Good girls are happier, no doubt. But, whether you’re an unhappy bad girl, or not, is totally up to you. Just know that I don’t care— my only desire is your obedience.”


She may have been spared life behind bars or the death penalty or life behind bars with giant aliens and whatever fate would have awaited her in prison, but she’d been placed into a house with a sadistic, psychopath who believes in punishing women with a cabinet full of implements.


I may have been better of with the death penalty. I’m not the submitting type.


“I see you’re contemplating your plight—no worries, my pet. You’ll have all night to nurse your sore bottom – and other places—mulling over how to change your ways. You’ll comply—one way or another. Most days at our house, you’ll be used—completely and harshly—and put to bed with your sex dripping.”


“It’s been a long day for you, my poor little pet. Let’s get on with this last bit of your punishment, so you can take a bath, eating a good meal before we can seal our contract. I want you in bed at a reasonable hour.”


Book Two: More Than She Bargained For


The Desiring The Forbidden Series


What Naughty Little Girls Get