Libby Campbell returns with a new release you won't want to miss checking out.  SEEING RONNIE is sure to please fans of spanking romances and the paranormal touch adds a different twist to this domestic discipline novel. 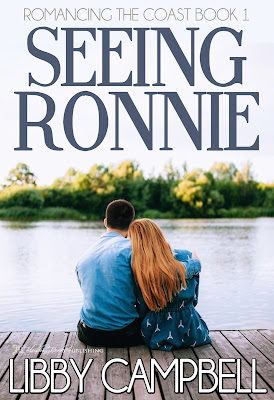 Ronnie’s an ice maiden but Del knows how to defrost her.

Blurb:
As a social blogger, Ronnie Flynn—aloof, beautiful, cool as a cucumber—is desperate to get to the society event of the year: Simon and Sadie’s engagement party on Seguro Island. No surprise that her name isn’t on the guest list, but as always, Ronnie has a backup plan. A plan that involves the handsome Del Franklin.
Del agrees to a swap: Ronnie gives him the scoop on his estranged wife’s dirty secrets and he takes her as his date to his boss’s party. The handsome, buff man of Italian descent makes only one condition: Ronnie better be good. No snooping. No manipulating. No digging for dirt. Or else.
With crossed fingers, and in spite of Del’s threat of putting her over his knee for disobeying, Ronnie ‘promises’ to be a good girl. Right. She’s not worried about Del. Her code of Keeping a Healthy Distance will protect her heart, and her backside. She’s too wily to get caught, anyway.
Ronnie sees. Literally. She can channel people’s feelings and see into their hearts. All her life, she has been hiding this secret weapon—her psychic ability—because what she sees is often too hard understand and impossible to share. If she can handle that secret, surely she can handle Del. Or can she? He’s not like anyone else. Nothing has prepared her for him. She shouldn’t react like this to his dominance. She’s an independent, wealthy woman in her own right. No man will tell her what to do. Yet, there is something about this sexy dominant Latin lover that makes her pulse race.
Will Ronnie allow Del to break her Code of Keeping a Healthy Distance? Will seeing Ronnie open Del’s eyes to a new world? Will the two of them ever see life the same way?
Publishers’ note: Seeing Ronnie is intended for adults only. Spanking and other sexual activities represented in this book are fantasies only, intended for adults. Nothing in this book should be interpreted as Blushing Books’ or the author’s advocating any non-consensual spanking activity or spanking of minors.

When you’re with me you will be polite and well mannered. Agreed?”
“Agreed.” Ronnie nodded soberly to show her good intentions, but under the table she crossed her fingers.
“You better mean that.” Del drained his coffee cup and levelled his eyes at her. “Because if I catch you prying or snooping—doing anything outside the bounds of good manners—there will be consequences.”
“Consequences?” Ronnie licked a drop of tea off her lips.
“Serious consequences.” The corner of his mouth lifted in a crooked smile. “I will turn you over my knee and paddle your bottom until you beg me to stop. And then I will spank you some more. Do I make myself clear?”
“You do,” Ronnie whispered. A damp flutter clenched between her legs and she pressed her knees together as if she could lock out the desire that suddenly sent her blood boiling. No one had ever threatened her like that before. Worse still, it was as though he was the one with the gift of second sight, as if he’d read her secret intention to ignore everything he’d just said. She glanced over her shoulder to see if anyone might have heard his sultry caution. No one was paying them any attention.
The very worst part was that she had no idea how she was going to turn off the part of her personality that wanted to know everything about everybody. She’d been accused of living through the dramas of other people’s lives and there was more truth to that than she cared to admit. Her own life was dishwater dull and she kept it that way so she had energy for her work as gossip queen. More importantly she kept her life orderly so that there was no mud that could be slung her way. She twisted her tea cup to avoid looking at Del.
“One last problem.” Del spoke as calmly as if he hadn’t just suggested the most erotic thing anyone had put to Ronnie in ten years or so. “I haven’t made a booking and I’m sure every hotel and B&B on the island will be full by now.”
“I have a place we can stay.” Ronnie forced coolness into her voice. She didn’t say it’s a fabulous place and it’s for sale. She’d only seen it in pictures but if it was half as good in real life, she planned to buy it. That was her secret and she wasn’t sharing it with anyone. She held her expression impassive.
“You’ve got a place on Seguro?”
“I wish. This place belongs to friends, but we can use it this weekend. I also have ferry reservations to get us there.” Even if she didn’t get an invitation to the Jacobson bash, she’d planned a weekend on the island to test drive the lake house.
Del lifted an eyebrow. “Separate rooms?”
“Absolutely. I wouldn’t have it any other way.”
The memory of the warmth and strength of his hand in hers made her think that sharing a bed with Del Franklin might be pleasurable. The idea of being turned over his knee made her legs tremble. But none of that was going anywhere. She indulged herself in little fantasies from time to time, but she never acted on them.
Ronnie had sworn off men a long time ago. 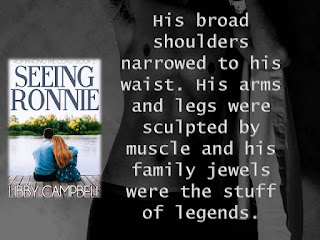 Don’t miss these other great titles from Libby Campbell and Blushing Books:


The Simon in Charge series:


Libby lives on the West Coast of Canada with her husband of over twenty-five years. An avid reader, she savors books that feature strong, independent women and the loving men who challenge them.


She loves mountain hikes, deep bubble baths, and all animals, but particularly small dogs with big attitudes and big dogs who think they are lap dogs. A woman for all seasons, Libby is happy cuddling in front of a winter fire, watching a summer sunset, listening to birds in the spring and walking in the autumn rain.


Optimistic by nature, Libby wants a solid HEA in her reading and her writing. She hopes you will enjoy escaping to the dream worlds where she spends far too much time.


Follow her on Pinterest to see the images that inspire her characters and the worlds they live in.