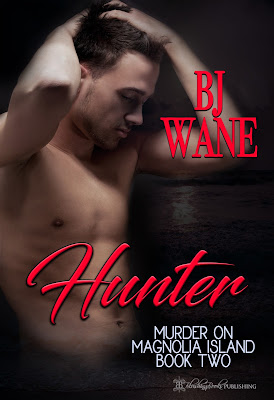 His strong dominance healed her painful past.  Her shy, caring demeanor cured his guilty conscience.  Together, they vowed to avenge a friend’s death.

BLURB:
After rescuing a woman from the storm-tossed waters surrounding his family island, Hunter Lemaster grows suspicious of Chloe Markham’s motive for being out in the inclement weather.  When his stranded guest exhibits signs of submissiveness and neglected need, her shy demeanor drew on the strict Dom side of him and he couldn’t resist giving her what she so desperately needed.  Taking advantage of her vulnerable state, he used his expertise to question her, but still was unable to get the full truth from her.
After returning to Charleston from her ill-fated trip to Magnolia Island, Chloe resigns herself to returning to La Rouge, the club her best friend introduced her to, to seek answers to her death.  After getting herself in a bind of her own making, she’s shocked when Hunter Lemaster swoops in to rescue her.  The truth is out about why she had been so close to his island and Hunter agrees to let Chloe accompany him back to Magnolia when his friends return so she can assist in their continued search for a murder.  A threat against Chloe at the end of the weekend proved they were on to something and also convinced Hunter to keep Chloe close, for her safety and his pleasure.
DISCLAIMER: This book is intended for adults only. It contains elements of power exchange, BDSM, including explicit sexual scenes and anal play. If any of these offend you, please do not purchase this book.

EXCERPT  (R)
“Know what I think?”
“No, what?”
“I think you could benefit from getting back into the swing of things again, and since you’re on my island, uninvited, I’ve decided you need to obey my rules, and suffer the consequences if you don’t.”
Oh, God.  Why did that simple dictate send a shiver of excitement rolling through her?  Before her brain could click in and send the signal to her mouth to tell him no, he whipped the tee shirt over her head, grasped her hands and placed her palms flat on the glass, level with her shoulders.
“Do not move them from that spot.”
And just that quick, Hunter tossed her back into that place where Chloe could let go of all her cares and concerns.  That strong, commanding tone brooked no argument, the look he pinned on her in the glass demanded just as much compliance.  He brought his hard hands up, cupped the fullness of her breasts and kneaded the soft flesh that hadn’t felt a man’s touch in what seemed like forever, but in reality, had not been all that long.
“Look at you,” Hunter breathed, not surprised at her quick complaisance.  He nailed it on the head when he labeled her submissive.  He watched as she glanced at herself, winced then looked away.  Frowning, he asked, “What did you see you didn’t like?”
“The storm,” Chloe returned with a bite of defensiveness in her tone.
So, there was a little fire behind the meek exterior.  Good to know.  Grasping her right nipple, he pinched the tender bud, hard.  “Try again.”
Gasping from the searing pleasure of that sharp pain, she admitted with a scowl, “An overweight woman pushing thirty.”  She started to lower her hands to shield herself from his knowing look, but once again he stopped her with a succinct dictum.
“Don’t move.”