Amelia Smarts, one of my favorite authors has joined me today with a tantalizing glimpse at her title, HANDLING SUSANNAH.  Thanks for sharing, Amelia. 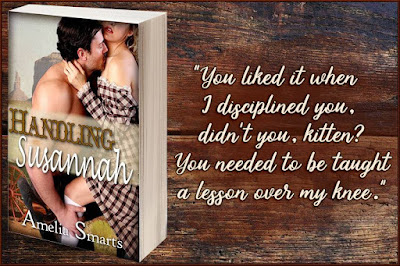 A bossy rancher with a twitchy palm. A spoiled, undisciplined young woman.

About Handing Susannah
Rancher Adam Harrington has long yearned to marry a diligent, virginal bride with a sweet disposition. When he reads a young woman’s unusual advertisement requesting a mail-order cowboy as her groom, he thinks they might be a good match. He writes the woman a letter saying just that, and she pens a favorable response, accepting him as her future husband. Adam packs up his belongings and heads west to a bright new future.
When Susannah Smith’s father bequeathed his ranch to her, it was under one condition: She must be married. For Virginia City’s fallen woman, finding a man to marry is no easy feat. The men in town who seek to court the hot-tempered, unwed mother are sluggards and drunks, not the kind of men capable of running a ranch. Desperate to find a suitable husband or else lose everything, she expands her search by listing an ad in the paper.
When the two meet, Adam’s commanding presence makes a startling but good impression on Susannah. The attraction between them is undeniable, but that is soon followed by wariness. Susannah had planned to marry a man who would do her bidding, not take over everything. It’s her ranch, after all! Equally befuddled, Adam thought he’d be marrying a woman who knows her place, not a temperamental brat who could benefit from some time over his knee.
Susannah feels outraged by Adam’s authoritative ways, but his dominant handling in the bedroom leaves her trembling with desire. Will she learn to accept his firm leadership and expectations? And will Adam grow to love the woman who differs so drastically from the kind of wife he thought he wanted?
Warning: Handling Susannah is an historical western romance containing sexual scenes and domestic discipline, including punishment spanking. If these themes offend you, please don’t buy this book.

Read the First Chapter for Free on Amelia’s Blog: https://ameliasmarts.com/handling-susannah-by-amelia-smarts/

Excerpt
“Come here and lie over my lap for our discussion, Susannah.”

She quirked her head to the side, confused. It was a strange way to ask her to sit on his lap. The prospect of it delighted her though. She’d already imagined being wrapped up in his arms while supported by his strong legs. She walked toward him without hesitation, noticing the censure in his gaze deepen as she grew nearer. But she did not allow his stern expression to discourage her. She felt hopeful that he would soon forgive her deception. After all, she had chosen him and she was beautiful. He didn’t yet know about her reputation or her son, so he couldn’t judge her for those things yet. One step at a time.

When she reached where he was sitting, she sat down on his lap quite provocatively and draped her arms around his neck, causing her bosom to be positioned centimeters from his face. He was to be her husband, and she had no desire to be coy with him. She drew a deep breath that raised her breasts to touch his chin and stared dolefully into his eyes, sincerely believing that her feminine wiles would cause the discussion to be less severe, if not forgotten altogether.

He inhaled sharply and closed his eyes for a moment, showing her that he was not unaffected by the close proximity of her body, but when he opened them, they were gleaming with disapproval. She saw lust there, too, but his jaw was set in determination not to allow it to sway him from the “discussion.”

“I said to lie over my lap, woman, not sit on it. You’re a peck and a half of trouble, aren’t you?” He pushed her off, took hold of her arm, and bent her over his knees face down. It happened so fast that it took a moment for her understanding to catch up with his actions. By the time she realized he intended to spank her, he’d tossed up her pretty pink skirt and petticoat. Susannah’s legs flailed in the air and her palms touched the floor. For a moment she felt like she was going to fall, but his large left hand curled firmly around her side and held her in place.

“Mr. Harrington!” she cried, squirming. “Surely you don’t intend to…” She couldn’t even say the word. Her face felt hot as her blood drained down to it and she could hear her heartbeat pumping in her ears.

Other Spanking Romances by Amelia Smarts
Emma’s Surrender – How completely he had mastered her, when even the pain he inflicted felt like pleasure. http://amzn.to/2oqCbTm

Corralling Callie – Jude has his hands full with Callie. She’s sassy and disobedient, but when she puts aside her foul-mouthed, defiant façade, the real Callie is as sweet and kind as she is beautiful. http://amzn.to/2iPVdPB

Claimed by the Mountain Man – Jack’s stern chastisement and bold mastery of her body leave Nettie begging for more, but is she truly ready to give up her freedom to be claimed by the mountain man? http://amzn.to/2b5SymF

His Little Red Lily – Innocent farm girl asks repeatedly to be hired as an entertainer, but the saloon owner has different ideas about where a stubborn, disobedient little girl belongs. http://amzn.to/1TouqoF

Fetching Charlotte Rose – A proud young woman learns lessons in love and safety when a no-nonsense man sweeps her off of her feet… and over his lap. http://amzn.to/1U3FCJJ

About Amelia Smarts
Amelia Smarts is a #1 Amazon bestselling author who was named Best New Spanking Romance Author in the 2016 Spanking Romance Reviews Reader's Poll. She writes kinky romance novels containing domestic discipline, spanking, and Dominance/submission. Usually her stories involve a cowboy, and they always involve a man's firm hand connecting with a woman's naughty backside. She believes it's important to tell a good story in addition to portraying hot sex and discipline scenes. For each book, she endeavors to write complex, flawed heroes and heroines who struggle, but eventually succeed, in their journey to love and happiness. A longtime lover of the written word, Amelia holds graduate and undergraduate degrees in creative writing and English. She loves to read, which allows her writing to be influenced by many different genres in addition to romance, including mystery, adventure, history, and suspense.