Tuesday's guest post welcomes Jessica Brand with her latest title, SERVING THE SCIENTIST.  Check out the hot scene below! 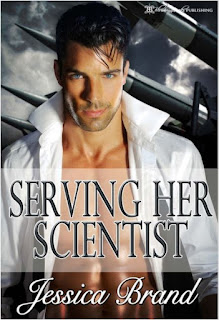 ·        Playing unauthorized games has consequences
Blurb
Paul and Donna are happily married. Maybe their marriage isn't the hot, pulsing sex romp it was when they first said their I dos on the beach so long ago, but it's safe, dependable. Boring. Donna, ever the bookish librarian, spends much of her spare time playing computer puzzle and word games in the internet. Paul's work as a rocket scientist in the military weapons industry requires that his computer remain safe and virus free. State secrets are at stake. That's why his lovely, but sometimes naughty wife is forbidden from playing her games on it.
Ignoring his instructions once too often, the inevitable happens and she infects his computer with an internet virus. Realizing the depth of her mistake, she is willing to do almost anything to atone for her sins and accepts that she will receive an old fashioned spanking as punishment. Much to her surprise, despite the pain, she finds the whole ritual exciting, awakening feelings that have lay dormant for years and arousing her to such a point that she craves more. She confides in her best friend, Peta, and is shocked by Peta’s in depth understanding of the benefits of erotic pain and punishment. Peta consults with Paul and then puts into motion a chain of events destined to change forever the tenor of Paul and Donna’s lives.
DISCLAIMER: This story contains the spanking of adults, elements of bondage, discipline and power exchange. If these activities are not to your taste, you are advised not to buy this book.

Exerpt
“Restraint, Mrs. White,” she whispered as both cuffs closed over my wrists at the same time. “So delightfully helpless,” she continued as I heard the locks click home and felt the cold steel close around my wrists.
I went weak at the knees and if she wasn’t holding me so tightly I might have collapsed. It wasn’t just what was happening physically, it was all of the theatrics. She knew better than I exactly what effect her words and actions would have on me. She was playing with me, teasing me, arousing me and there was nothing I could do to stop her, even if I wanted to. I knew I was safe and that no real harm would come to me.
Turning to Paul, she said, “Position yourself, Mr. White.”
When Paul was sitting comfortably on the chair he had placed in the middle of the room, Madame Renee literally dragged me over to him. She then turned me around and lowered me over his knee. As I was going down, I wondered who was getting more out of this. He was already hard as a rock. And I was making a wet mess in my new La Perlas. Who was winning here? We were tied.
His hand came down on my wrists and held them, pushing them a little further up my back until I gasped. It was discomfort bordering on pain but as my mind was focusing on that, a blindfold was pulled over my eyes and tightened, pressing gently against my eyelids and holding them closed. Then the spanking started. Five hard swats on each cheek before my new panties were pulled deep into the crease of my butt and my cheeks were caressed for the first time. Already my mind was becoming overwhelmed. Too many things happening in such a short time.
About Jessica Brand

Jessica was born in Melbourne, Australia in 1958. Having lived in many parts of Australia and overseas, she now resides in Sydney and writes for fun.

With a lifelong interest in her subject matter she finally decided to put some of her experiences and fantasies into words, toning them down somewhat for public consumption. Her first book was released in mid 2014, using the pseudonym of R. R. Greaves. This was followed by a new release in Feb 2015 and there are a number of new stories in different stages of production.