Juliette Banks is visiting with a peek at her hot new release, THE RUSSIAN BRIDE.  A prolific author who also writes under the name Rachel de Vine, this newest book by Juliette is sure to please anyone who enjoys erotic/spanking romances! 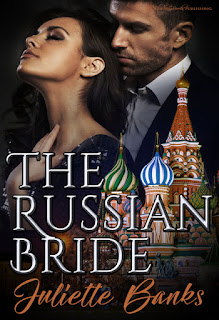 Viktor took her to a dark and frightening place. It was the love of James that saved her.

Natasha, a Russian-born woman living in London, catches the eye of Viktor, a middle-aged Russian gangster. He wants her as his wife, the mother of his son, and his submissive partner in the kinky sex he enjoys at his isolated home near Saint Petersburg. But he doesn’t ask her to accompany him – he just takes what he wants.

Everything turns sour, however, and on a visit to London, Natasha has to flee for her life – where businessman, James Miller, comes to her aid. Over the course of the next few days, Natasha tells James her story, and as horrified as he is, he cannot deny his attraction to the beautiful young woman. He vows to help her.

Neither of them realize quite how much danger they will be in for defying Viktor, but James is willing to risk everything to rescue her from this man. Can he do it? And does Natasha return his feelings? 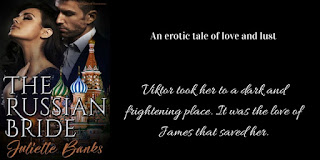 
In the main room there were already a large group of men with their slaves or submissives, as before. The women were in various outfits, but none was dressed as Natasha was. She caught several inquisitive looks, and one man smiled and winked at her. She decided that she had better not respond to him and risk making Viktor angry.


He led her by the hand as they went to sit on one of the chairs; or at least, Viktor sat on the chair, and she knelt alongside. There were several displays taking place in front of them, involving a woman being fucked by two men, and another woman being spanked by her Master’s friend, while sucking off a second man. Meanwhile, waiters were winding their way between the various displays, making the whole scene to Natasha seem positively surreal. The women all seemed to be willing victims. There was no sign of any coercion that she could see.


Viktor bent and whispered in her ear. “Now is the time for our little display, my dear. There’s no need to worry about it, though.” As if to reassure her, he put his hand under her frock and stroked her bare flank. He spoke out to the men present.


“Gentlemen, allow me to introduce you to Natasha, my future wife. She is a virgin, and will remain so until we are married. But I wish her to learn about our delightfully wicked ways, so I would like to request that my friend, Grigory, assist me in presenting her to you. She is not to be touched by anyone else here, gentlemen, if you would be so kind as to respect my wishes.”


Grigory came alongside them both and indicated to Natasha that she should place herself over Viktor’s lap, which she did, without any hesitation. Already, before either of the men had laid a hand on her, she was excited and could feel the dampness between her thighs. Grigory took the bottom hem of her dress and brought it up and over her body so that her bottom was exposed to the waiting men, all of whom had stopped what they were doing and had turned in their direction.


Viktor began to spank her with his hand, slapping her rump hard, one cheek at a time. The room became silent, except for the sound of his hand striking her cheeks. Natasha began to pant a little, as she responded to the stimulation of the spanking. She pushed her bottom out more, as though asking for him to continue.


“Ah, your little Natasha is eager to feel the pain that leads to pleasure. She is going to make you a wonderful wife and submissive, Viktor, when she has been fully trained.”


When she isn’t writing, Juliette likes to travel to exotic places all over the world, and has been doing this since her twenties. But she also loves the beautiful British landscape, and lives in a lovely part of central England. She adores reading, listening to music, and being with her wonderful extended family.


Websites for both Juliette Banks and Rachel de Vine