It's WIPITUP Wednesday where author's post snippets from current works in progress.  Please feel free to leave feedback, as I love hearing comments and suggestions from both readers and other authors. 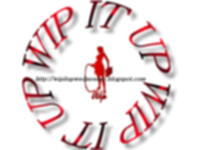 “Do not move them from that spot.”
And just that quick, he tossed Chloe back into that place where she could let go of all her cares and concerns.  That strong, commanding tone brooked no argument, the look he pinned on her in the glass demanded just as much compliance.  He brought his hard hands up, cupped the fullness of her breasts and kneaded the soft flesh that hadn’t felt a man’s touch in what seemed like forever, but in reality, had not been all that long.
“Look at you,” Hunter breathed, not surprised at her quick complaisance.  He nailed it on the head when he labeled her submissive.  He watched as Chloe glanced at herself, winced then looked away.  Frowning, he asked, “What did you see you didn’t like?”
“The storm,” Chloe returned with a bite of defensiveness in her tone.
So, there was a little fire behind the meek exterior.  Good to know.  Grasping her right nipple, Hunter pinched the tender bud, hard.  “Try again.”
Gasping from the searing pleasure of that sharp pain, she admitted with a scowl, “An overweight woman pushing thirty.”  She started to lower her hands to shield herself from his knowing look, but once again he stopped her with a succinct dictum.
“Don’t move.”
Before, it had been physical bondage that kept Chloe immobile when she wanted to squirm away from a painful truth, but now the only thing binding her was Hunter's command.  The voluntary bondage added an edge to her growing arousal, slowly taking her to that place she’d missed so much and thought never to be drawn again.
“Very good, pet,” he praised her, wondering where the endearment came from as he wasn’t prone to spouting them.  Then he shoved aside the unanswerable question in favor of filling his hands with more of her abundant flesh.  “So, you think you’re overweight?”  He resumed kneading her breasts, liking her extra softness.
“No, I know I am.  I didn’t use to….”  Chloe stopped short of mentioning her split with Jake.
“Ah, so the extra pounds have been recently put on.  Ever since you quit going to the clubs?” Hunter guessed.  “Want to tell me why?”
“No.”
Chuckling, he bit her neck again.  “I’ve got to quit giving you a choice about answering.”
Chloe’s toes curled against the marbled floor from that sharp nip, but that was nothing compared to the ripple that slithered down her body when he yanked at the drawstring keeping the loose shorts up and they fell to her feet.  “Please,” she whimpered, unable to voice what she pled for since she had no idea herself if she wanted to run from him or beg him to continue.
“Oh, I do love hearing a woman beg,” Hunter murmured in her ear.  “And I haven’t even begun yet.  Tell me something.”  He coasted his hand down her back then palmed her right buttock.  “Do you like a little pain along with bondage?”
“Who said I like bondage?” she asked as a way to avoid answering him.  The sharp smack he delivered to her butt pulled another whimper from her, the sting more pleasurable than painful.
“Avoiding an answer is as punishable as lying.  But, I think I’ll forgive you that infraction this time.”  He delivered another slap to her opposite cheek.  “Because I have my answer in your response.  Your body can’t lie.”  He ran a finger over one puckered nipple as he smacked her ass again.
Lightning struck again.  Not in the storm raging outside, but the one whipping through Chloe's body as he belabored her buttocks with a litany of slow, steady smacks, each one a little harder than the previous.  Hunter continued to tease and torment her nipples with his other hand, alternating between pinching and caressing, her entire body heating from the blissful, pain-filled pleasure sweeping her starving senses.  God, what glorious euphoria it was to give herself over to someone else again, to shove aside all decisions and go with the encompassing pain and building pleasure.
“Tell me why you were out today, Chloe.”

I hope you enjoyed this scene.  I should have book three completed in a few weeks.  Be sure to check out the other stops on this blog hop!