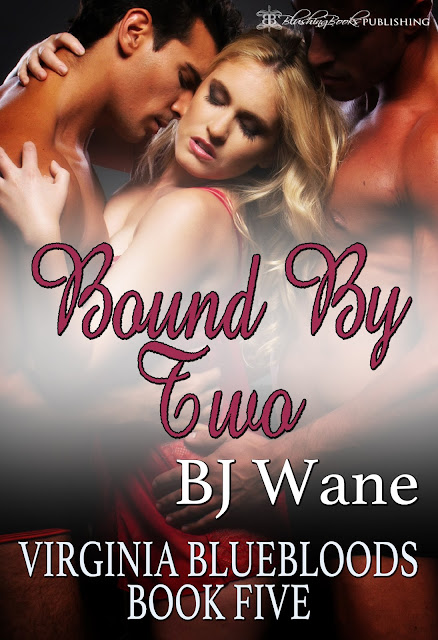 NEW RELEASE!  BOUND BY TWO, a Virginia Bluebloods Christmas novella is out on December 7th.  Thank you to all of the readers who hinted they wanted Dale and Eli to have their own story-I hope you enjoy what I came up with for them.  I left a little teaser for you below.


Blurb:
After overhearing her husband and doctor plotting against her, Danielle Morrison flees her home in West Virginia. A few weeks later, after finding a place to lay low for a while in Richmond, she ends up stranded in an unfamiliar parking lot one night. Two caring, protective and dominant men come to her rescue then offer her a glimpse into a lifestyle she never imagined would be for her. Soon she can’t resist either man or the sexual exploration they offered her, but will her secrets jeopardize her new relationships as well as her freedom?


Dale Evans and Eli Jackson have been best friends since serving in the military together after discovering they both had a penchant for BDSM and a love of ménage in common. Neither can resist the pull of Dani’s vulnerability, fear and open curiosity about their lifestyle, but their every effort to learn more about her over the next weeks is met with unbending resistance. After learning part of what she was keeping from them, they back away from her in anger and disappointment only to return too late. Will their mistake cost Dani everything, or will they come to her rescue in time to save her from her husband’s threats?

Dale had been waiting for her brain to contradict what he knew from the look on her face her body was telling her. He didn’t know if she was submissive, but he knew interest had taken hold of her in the shower alcove because she didn’t shy away from what she saw. As they led her down the row of stations, those expressive eyes had taken in every detail, never looking away even though an enticing blush had put color in her cheeks. She didn’t ask questions, chose instead to watch and learn, so they kept silent. Whether this turned out to be the start of something new for her or just a one-time thing, she needed time and space to work that out.


“You probably have about thirty more minutes.” Laying a hand on her lower back, he urged her forward. “Dance with us before you go.”


He didn’t give her time to protest, just ushered her onto the dance floor, grateful for the smaller attendance tonight. Always in sync, he didn’t need to say anything to Eli for him to join them. Pulling Dani’s soft body next to his, he kept one hand around hers as he clamped his other on her lower back, her wide, shock filled eyes staring up at him sending a sharp arrow of lust to his cock. Damn, but she did something to him with that look.


“Yes, sweetie, I want you. But relax, I can control myself if you can.”


“What? I don’t… I mean, I’m not here for…” She trailed off as his lean cheek creased with his wicked grin, a small dimple revealing itself.


Was it the threat insinuated in that low voice that sent a shiver up her spine and had her nipples tightening, or the intimate movements of their bodies shifting against each other in tune to the not slow but not fast music? She didn’t have time to come up with an answer to her own question because her heightened senses skyrocketed with the press of another hard body behind her, another semi-erect cock poking her butt to join the feel of Dale’s erection rubbing her just above her mound. Wide hands gripped her hips, forcing her to clutch Dale’s broad shoulders in an effort to maintain her balance and her sanity.


She stumbled and heat enveloped her face. “I’m sorry, I’m not much of a dancer.” That was her excuse and she was sticking to it. Not to herself, or them, would she admit it wasn’t her lack of dancing skill but their skill at… everything that had her struggling to hang onto some semblance of dignity.


Eli leaned down and nipped her small earlobe. “Let us guide you, little one, and I promise you won’t fall.”


Oh God, she was doomed, at least for the remainder of this song. That whispery voice in her ear following the little sting on her lobe shot a bolt of lightning heat down to her core, eliciting more moisture to dampen her already sticky panties. Every shift of their bodies rubbed her nipples against Dale’s hard pecs, her crotch and buttocks back and forth over their thick bulges. Her brain turned to mush and her body into a hot, volcanic furnace on the verge of eruption. Laying her forehead against Dale’s shoulder, she surrendered to the new, rioting sensations they evoked. They might not lead to anything, but the strange warmth invading her body was a welcome respite from the constant coldness that had been with her since she heard that damning conversation between her husband and her doctor.