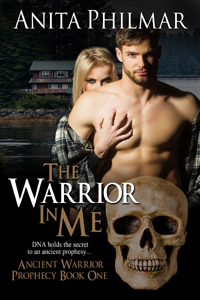 BLURB:
Special Security Agent Sebastian Berlin is eager to track down his partner's killer. Instead, he’s assigned the job of baby-sitting a scientist. His boss thinks she's the key to an Ancient Warrior Prophecy. Science never interested Sebastian, but the know-it-all female standing at the end of his Alaskan dock could persuade him to do a little experimenting. That is, if he can keep his Neanderthal Warrior genes from taking control.

DNA specialist Lily Sinclair is in need of a vacation, or so her over-protective ex-husband tells her. Arriving in chilly Alaska instead of sunny Cancun, she's tired and cranky and so not in the mood for her bodyguard's he-man tactics. Still, there's something about the sexy eye-candy that makes her want to lick him all over even as she's demanding to go home.

Then Lily's ex is poisoned, and Sebastian is certain the two murders are connected and she could be next. She knows he's hiding something, but with the worldwide release of Neanderthal DNA project only days away, she has no choice but to trust him to protect her. But can she trust him with her heart?

“I hate to tell you, but we found Cain’s body last night. He took two slugs in the chest.”
Relief, followed quickly by shock, filled Sebastian. A numbing sense of disbelief overwhelmed him. “What the hell? I thought he was working on a simple security detail.”
“Did he discuss his assignment with you?”
Sebastian ran a hand through his hair and scrambled to recall his last conversation with his best friend. Cain had called a week ago with a request for information on the people he’d been assigned to protect in California. His voice had reflected a bored almost disgusted tone. At the time, Sebastian had held his tongue and didn’t comment, but later he questioned the anomaly. His friend loved life and never became discouraged even when the odds were against him.
Frowning, Sebastian rubbed a hand over his neck, stroking the hairs that suddenly stood on alert. His initial disbelief faded. A gaping hole widened before him and stretched into an endless sea of despair. What the hell would he do without his best friend, his confidant?

Now available for PreOrder at

Anita Philmar likes to create stories that push the limit. A writer by day and a dreamer by night she wants her readers to see the world in a new way.
Influenced by old movies, she likes to develop places where anything can happen and where special moments come to life in a great read.
Naughty or Nice?
Read her books and decide.