Tuesday Guest Blog:  Summer Graystone is visiting today, sharing a glimpse at her title, BAILEY'S LITTLE ADVENTURE.  Thanks for stopping by, Summer! 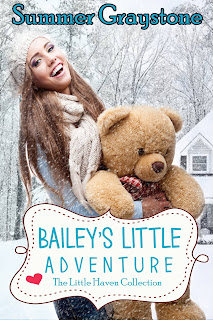 
Even though she is an adult with a full-time job, Bailey loves role-playing as daddy’s naughty little girl. Nothing is more fun than dressing like a teen and teasing her husband, who is always ready to punish her properly before pleasuring her more than she would have thought possible. When she discovers that he would like to tie her up so that she is completely vulnerable and at his mercy, she trusts him to keep her safe, even when he pushes her past her comfort zone.


But Bailey’s perfectionism makes her insecure about their relationship, and when she makes a mistake that disappoints her daddy she panics and wonders if she could lose him forever. Can he prove to Bailey that even when things get really hard, he will always be there for his little girl with the love, guidance, and discipline she needs?


“Take off your bra, Bailey.” His voice had gone soft and hypnotic. My hands trembled as I reached behind me and undid the clasp on my bra. The straps slipped off my shoulders, and I let it fall to the floor.


“You’re so beautiful…” Ian knelt in front of me, his eyes roaming over my exposed breasts. I was pretty sure we were out of my role-playing and into his thing now, and I sat still, waiting for whatever he wanted… or needed… to do.


He held the ice cube out, water dripping on his knee. With infinite slowness he touched the ice cube to my nipple. I jerked away, and Ian looked up at me.


“Sit still, Bailey. I don’t want to have to tie you up.” His voice dropped even lower. “Unless you want me to?”


I shook my head. I knew I was in trouble and deserved to be punished. I know when we do the bondage sessions, it is always amazing; I just wasn’t sure I wanted to be restrained when he was using all the ice on me.


“Then sit still. And don’t talk, unless I ask you a question. You’re under obedience.”


He brought the ice cube back against my breast, circling my nipple, but not quite touching it. For a second I couldn’t tell what it felt like. It was painful, and I thought I wanted him to stop, but I knew I couldn’t ask for that.


I gritted my teeth as he ran the ice cube in smaller and smaller circles, teasing, flirting, grazing my hardened nipple. I knew it would be intense and I was right.


When he touched the ice to my puckered nipple, I cried out, grabbing his wrist. He looked up at me, one eyebrow raised.


“Let go, Bailey.” He held my eyes, waiting patiently until I reluctantly let go of his wrist. “Hang on to the edge of the chair. Don’t let go. If you do, I’ll find something else to do with you.”


I was breathing hard, but I did as he asked, grabbing the edge of the kitchen chair. Ian smiled, then went back to his patient task, making slow circles again, starting the whole thing over. My only hope was the ice cube would melt.


He ran the ice cube across my nipple again, and I bit my lip. It was intense, but almost instantly he pulled the ice away. Before I could even process what I felt, he leaned forward, licking my nipple. My body reacted to the familiar, arching against him, but before I could even enjoy the feeling, he pulled away. The ice cube came back, rubbing against my now-softened nipple.


He kept switching, rubbing the ice cube over my nipple, pulling it away, then sucking my nipple into his mouth. He moved between my breasts, kissing and sucking me, then rubbing my nipples with the ice.


I’d spread my legs, an open invitation, aching for his touch somewhere besides my breasts. I knew he was aroused. There was no way I could miss his erection tenting the front of his sweats.


I was gripping the chair so hard my knuckles were white. As much as I wanted to be touched, I wanted to touch Ian.


But I knew he had the patience and self-control to keep this up far longer than I could stand. He knew this, and it was something he exploited.


By the time the cube melted, I was gasping, shaking, and so totally aroused I could barely hold still.


Finally he sat back on his heels, hands resting on my knees, looking up at me. “Did you like that, Bailey?”


“Yes.” My voice was a breathless whisper.


I shook my head. “No. I want…” I bit back what I was going to say. Part of obeying him during times like these meant that I could only say yes or no. It was hard for me, and no matter how hard I tried, I usually broke obedience.


He raised an eyebrow. “What do you want?”

Hi! So my name is Summer, and I’m a part time erotica author, who attends classes during the day, and writes dirty romantic erotica by night. When I’m not in school studying photography, I also work as a portrait photographer at a small local studio near the beaches of Florida.

Some fun facts about me are that I love apple martinis (I just turned 21, so I can’t get enough of them) and I love Star Wars, The Vampire Diaries, the Originals, The Walking Dead and Smallville. I’m a gamer girl too. Animals are close to my heart, and I have a 3-month-old bearded dragon named Yoda (he’s green and white) and a spaz of a dog named Nala who is a Terrier/Pomeranian mix, but I digress.