Thank you for stopping by to visit my two guests this week, Libby Campbell and Adrienne Blake.  Libby's offering a glimpse at her domestic discipline title, WINNING SADIE and Adrienne has a hot snippet from CARDINAL'S WHORES.

First up is Libby... 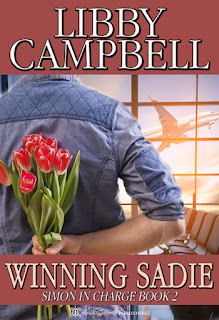 Sadie Donohue – gorgeous, sexy, smart and totally smitten with Simon Jacobson.
Simon Jacobson – gorgeous, sexy, smart, uber-rich and utterly smitten with Sadie Donohue. This sounds like a perfect match, so what's the problem?
Sadie is from the wrong side of the tracks: working class neighborhood, public schools, sausages on the backyard bar-b-que. She was raised to fend for herself and bow down to no one, especially a man. Since meeting Simon, everything her liberated, independent mother taught her has flown out the window. Now Sadie is regularly over Simon’s knee for being her sassy, strong-willed self. And she loves it!
Simon hails from a world of wealth and privilege: gated communities, private schools, servants turning steaks on the bar-b-que. As the owner of a multinational corporation he is used to giving orders and getting what he wants. His life revolves around making millions and socializing with people whose flamboyant wealth intimidates Sadie. Still, she’s thrown into the deep end and told not to do anything to embarrass Simon. Or else!
At their lavish engagement party, Sadie’s hears her mother’s voice echoing in her head, reminding her that she will never fit in. Best intentions aside, Sadie will always be an embarrassment to Simon. That's it. Engagement off!
Simon is in charge and he has other ideas. But will Sadie's mother be their undoing? Can Sadie reconcile her past with her future?
This love story includes spanking an adult woman, explicit sex scenes and more. If such material offends you, please do not read this book.

Simon Says, book one in the Simon in Charge series, is
now free on Kindle Unlimited or only 99c in the Amazon Store!

Simon stood and put his champagne flute on the table. His lips twitched, as if he was fighting a smile. “Let me guess when you started having these doubts. I’d pin them as starting about a week ago, maybe the day you drove out to the airport and picked up your mother?”
Without meeting his eyes, I took his outstretched hand let him help me to my feet. He’d pegged the moment precisely. I was lifting Mom’s suitcase off the carousel when she made the first jibe. She looked over my shoulder as if searching for someone.
With a lift of her chin she taunted, “Where is the legendary Simon Jacobson? Is he too busy to welcome me himself?”
To the outside world, Mom acted as though she admired Simon. She complimented how well he treated me, how lovely his house was, how generously he treated his guests. When it was just the two of us she cracked critical, undermining comments that bit like a thousand beestings.
She said things like, “Simon’s friends live in a different world. You can’t have him without them and they speak a foreign tongue.”
With a skill perfected over my lifetime, Mom eroded my confidence that someone like him could love someone like me, and that the rest of world would accept us. Her week-long campaign to make me question my future with Simon was a resounding success. The more time I spent in the company of his friends that weekend, the less I believed that I would ever belong there.
Now it was just Simon and me, a lazy Sunday afternoon, and an engagement to cancel.
I breathed in the soft savory smell of him standing in front of me. His hand was warm and strong as he held mine. He lifted my chin, forcing me to look him in the eyes. “I asked you a question: did you start having second thoughts as a result of your mother’s visit?”
I turned away.
“I’ll take that as a yes.” He kissed me on the cheek. “I think we need to discuss this. With you over my knee.”
Thank you Libby.  Now for Adrienne......

Blackmail, betrayal, and bedroom lust are standard fare in the court of Henry the Eighth. Joan Larke has heard all her young life that this is so, but she is completely unprepared to be dragged into the midst of it. Dragged she is, though, when the beautiful girl falls into the hands of the powerful and power hungry Thomas Wolsey, cardinal, confidant, and finally lord chamberlain to the king.

Wolsey knows how many secrets are passed in the bedchamber, and shamelessly enlists any woman who comes within his influence as his spy. He turns her, under duress, into a whore who brings him information from her pillow talk with the movers and shakers of the early 16th century. But he needs love, too, and he keeps Joan to himself—for a time.

When Joan finds herself no longer wanted and in peril of spending the rest of her life in a nunnery, she turns to Lady Anne Boleyn, who is rapidly supplanting Queen Catherine in Henry’s affections. But treachery is a two-edged sword, and the betrayer often becomes the betrayed in the shadowy world of Tudor court intrigue.

Although Joan has secrets of her own she can trade, in the end, she can do nothing but watch and tremble as the cardinal and the would-be queen battle behind the scenes for the love of their king, and to keep from winding up under the axe, as so many did in those dark days.

His touch was electric, but the thrill was tinged with fear. She was not as comely as once she was and she was afraid to undress fully in front of such a beautiful man. What would he think of her? But those kisses were so sweet, his attentions so tender. The bloom of passion kindled within her mind smothered her fear, and as his hand rose higher along her leg, she chose not to restrain him, preferring to live in the moment and leave tomorrow to look after itself.

His hand soon reached the top of her thighs, and as he caressed her there, she was pressed gently down onto the couch. She did not resist him, though she trembled every inch of the way. Yet it was a sweet fear, and her greatest fear of all was that he would stop and think better of what he was doing. But he did not stop. She sensed his need was as great as her own, and his adept fingers teased and played with her, turning her desert into a honeyed oasis, while his mouth kissed the orbs of her bosom, releasing her nipples from her corset, and sucking her so hard she thought she would cry out.

Author Promo
Adrienne lives in the North East, in a rural area surrounded by cows and determined rabbits.  She has two cats, both masters of the contemptuous stare, who she idolizes. When she’s not penning for monies she’s either baking something, or driving very long distances for the hell of it. This renders a unique opportunity to ponder her plots and characters; she prides herself on writing the unexpected, and is always cooking up new ways to pleasure her readers. Her favorite genre is twisted history - and applies varying degrees of heat to keep you titillated from beginning to end.

Or e-mail her directly at:
authoradrienneblake@gmail.com