Allison West return's as my Tuesday guest with a look at another hot release.  You won't want to miss checking out her historical, THE DECOY BRIDE! 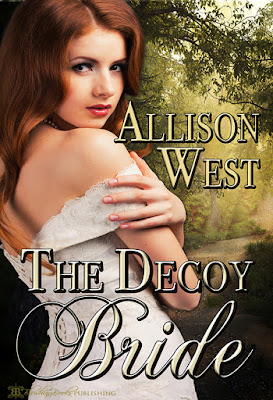 
New Forest is dangerous territory, where vile men snatch affluent brides-to-be, forcing marriage, solely for a woman’s dowry. With the increase in violence, brides of wealth often hire a decoy to ensure their protection.


When Violet Adams is forced by her caretaker to become a decoy bride, she must accept the position with honor, even if it means she may not return. Setting out for New Forest, she soon discovers that being a decoy bride is not the worst of the danger that lurks, the decoy hunt is far crueler.


Borrow for FREE with Kindle Unlimited


Violet gripped the bed sheets in her palms, moaning which only further encouraged him to continue. He wanted to take her over the edge and bring her to new heights. No longer fearing for their lives, he desired her to feel spent not from fear and exhaustion but solely of love.


Her insides clenched onto his digits as he thrust them in and out, his tongue teasing her pearl as if a bolt of lightning tensed through her body, electrifying her. Violet trembled and gasped, clenching on his fingers as a rush of warmth seeped into his mouth. He sucked and licked every drop from her quim, before guiding Violet onto her back.


Allison West has been inventing worlds and writing stories for years. Her favorite novels are those that leave a lasting impression, long after the final page is read. You can find more about Allison on Facebook and Twitter.
Visit her website here: