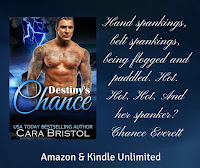 Destiny’s Chance Blurb:
Fate gave her a chance for love.  Is she brave enough to accept it?
Destiny Grable has loved Chance Everett for as long as she could remember, but he was never interested in her until a tragic act of fate grants her heart’s desire. Now Chance is all hers—body, mind, and soul. But once they’re together, she discovers he has a kinky side she never knew about. Is she ready for it? Can she handle it? And Chance isn’t the only one with a secret. If he discovers what she’s hiding, will he still want her?
Destiny’s Chance was previously published in 2013. This is a re-release.

Not who they pretend to be  By Cara Bristol
I love characters with secrets. The hero and heroine of Destiny’s Chance have some whoppers! There’s some clues as to what they’re hiding in their character bios:
Name: Destiny Grable
Occupation: Photographer
Likes: Singing, Mexican food and cooking.
Dislikes: Her frizzy hair and overweight body.
Her biggest secret: She pretends to be Chance Everett’s friend, but she’s in love with him and hopes for more. But he’s not only out of her league, he’s totally off limits.
The worst day of her life: When her best friend Zoe Richards is killed.
Her biggest secret: Destiny is not who everyone believes she is.
Name: Chance Everett
Occupation: Auto body mechanic
Likes: Mexican food, sports, keeping physically fit, hanging out with his brother Roman.
Dislikes: Subterfuge and lies.
The worst day of his life: When a car accident killed the woman he loved.
His biggest secret: He and his girlfriend are on the outs. The only thing they share is a kink. The woman he really loves, he can’t have.


A silk kimono slithered off a hanger to land on a chest on the floor of the closet. She hung up the robe and eyed the trunk. Made of aged, saddlelike leather, it had thick rawhide handles and brass hardware.


She dropped to her haunches. “Probably locked anyway.”


She pressed the button. The latch popped. She wavered, then surrendered to curiosity and lifted the lid.


“Oh my God!” She clapped a hand over her mouth and fell on her ass. “That’s his kink.” She stared at the treasure trove of spanking implements. Paying attention to how she removed them so she could replace them exactly as she’d found them, she examined the items. Several paddles of different shapes and sizes in both leather and wood. A pom-pom-like flogger with supple soft leather strands and a stiff wooden handle. Some common items: a hairbrush, a wooden spoon, a ruler. And a strop resembling a belt split into two parts. A tawse! She’d heard of them but never had seen one until now.


She smacked her palm with it. Biting. How would it feel against a bare bottom? She pictured herself laid out like an offering over Chance’s lap as he spanked her bottom until it was supersensitive and then stung her cheeks with the tawse.


Her pussy cheered with a twitch.


She fantasized often about being spanked but had no idea if she’d like it if she experienced it. However, she loved leather—appreciated its hard and soft textures, its masculine scent, the snap it made. Such a versatile material. Sensual. Sexy. She stroked the soft strands of the flogger, then whacked her palm with the tawse again.


She sat cross-legged on the floor like a little girl playing with grown-up toys. All she required for some really wicked games was a playmate named Chance.

Get to know Cara 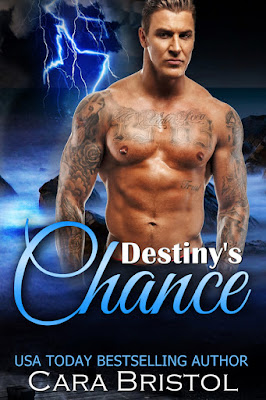