Jane Henry is visiting with an enticing excerpt from her new release, CLAIMED ON THE FRONTIER.  Take a moment to see why this title earned a top Amazon 100 spot in just two days-congratulations Jane! 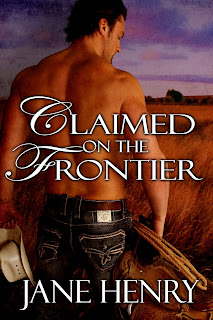 Claimed on the Frontier


Pearl has fended for herself since she was orphaned at a young age, but on the night she meets Aaron Stanley her life is thrown into chaos. The handsome pioneer and his brothers are headed west to stake their claim on the frontier, and when an unfortunate turn of events leaves Pearl without a roof over her head it is Aaron who comes to her rescue, offering to bring her along provided that she agrees to mind him.


As they begin their journey, Pearl soon discovers that Aaron is a force to be reckoned with. Though he quickly proves more than willing to take her over his knee for a sound spanking when her behavior warrants it, she is drawn to his stern, uncompromising dominance, and when circumstances force them into a hasty marriage she is happy to promise him her obedience.


Despite her headstrong nature, Pearl finds herself submitting willingly to her new husband’s mastery of her body. But even as their passion blossoms into love, Aaron is determined to be as firm as necessary to keep his bride safe in a hard, dangerous land. Can their bond survive the harsh realities of life on the frontier?

I had  difficult time picking between the four excerpts Jane gave me to post as they were all so good!  Since I have a penchant for leather, I finally decided on this one.  I'm sure you'll like it as much as I do!


“You'll stay in position while I punish you.”


I heard the door of our bedroom creak open, and Aaron's heavy footsteps behind me. I did not move. A warm rush of air followed him, lifting my chemise ever so slightly. Our room was cooler than the main room of the cabin. It seemed fitting he brought the warmth in with him, as if his presence alone could heat the room.


“Very good,” he said, his voice thick with anger. “Good to see you obey at least one of my instructions.” He paused. “You'll stay in position while I punish you.”


Would he not take me over his lap, then?


I kept my eyes shut tight, and tears clogged my throat. I did so hate to disappoint him, or make him angry. And it was much harder than I'd anticipated, lying over the bed with no touch from him, without feeling his strength beneath me. I felt removed, as if he didn't want anything to do with me.


I heard the jingle of his belt buckle. My breath caught, my limbs shaking. He'd never taken his belt to me before, and I feared the sting of leather. I heard him pulling it through the loops of his trousers. I imagined he was folding it over in his hand, as he prowled closer to the bed. I jumped as I felt a warm hand on my lower back.


“You jump as if you're frightened. Are you frightened, girl?”


I swallowed, my voice shaking as I responded. “Yes, sir.”


He stood then. His voice hardened. “Good. You ought to be. I don't want to have to do this again. Twelve sound licks with my belt ought to form a lasting memory.” My chemise was yanked up and I was bared to him.


Was I right?  Get your copy here:

Available for purchase at:

Other books by Jane Henry:


A Thousand Yesses: They are best friends...can they be lovers?


Begin Again, book one in the Bound to You trilogy: A desperate wife pledges her obedience to an online dominant.

Come Back to Me, book two in the Bound to You trilogy: Meredith and Paolo attempt a weekend of intense training to adapt to their new lifestyle of dominance and submission.


My Dom: Curiosity drives Heidi to yearn for a taste of her amorous neighbor's kinky pursuits.


Jane has been writing since her early teens, dabbling in short stories and poetry. When she married and began having children, her pen was laid to rest for several years, until the National Novel Writing Challenge (NaNoWriMo) in 2010 awakened in her the desire to write again. That year, she wrote her first novel, and has been writing ever since. With a houseful of children, she finds time to write in the early hours of the morning, squirreled away with a laptop, blanket, and cup of hot coffee. Years ago, she heard the wise advice, “Write the book you want to read,” and has taken it to heart. She sincerely hopes you also enjoy the books she likes to read.